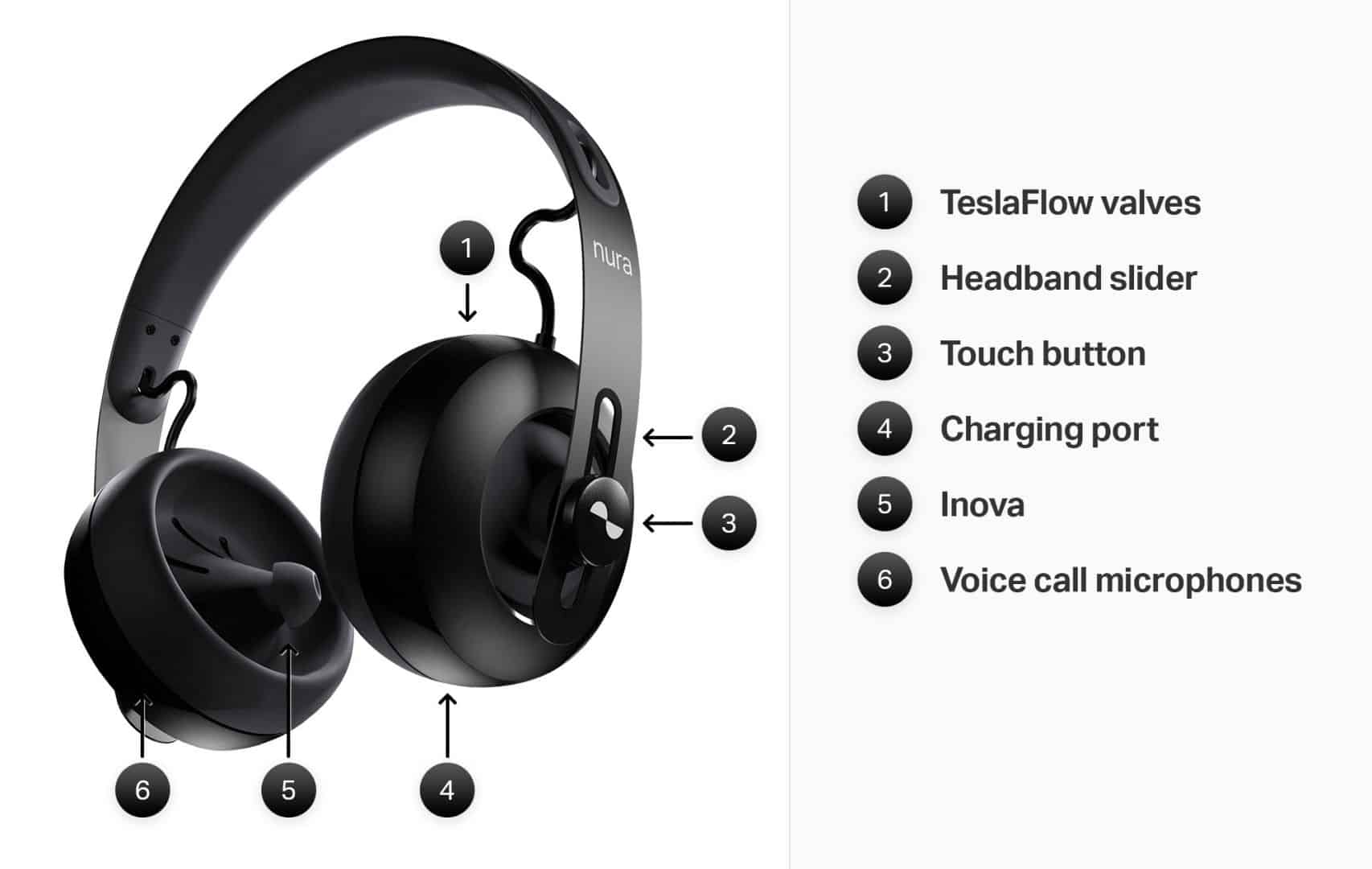 Nuraphone is a wireless headset unlike anything you’ve ever seen before. It is both an on ear and an in-ear. In particular, this earphone has the ability to analyze the ears and adjust the sound according to smart and active noise canceling of the best type in the world.

The headset appears to be like the discarded accessories you saw in the ad after the magazine but it was actually one of the noise-canceling headphones with impressive sound.

First, the design of Nuraphone looks as normal as any earphone. Metal headband, classic round earcup and black paint. It seems Nuraphone is not a headset born to show off to others.

Turn around and you’ll see something right out of the earcup. This is the part to put in your ears. This part is elastic to fit with different sizes and types of ears of the wearer. This is also a testament to a headset created with a customizing philosophy for each individual’s experience.

The earpad and earbuds are made of a seamless piece of silicon. This material choice will be quite durable compared to leatherette materials like conventional headphones but to see what the wearing experience will be like.

The fit and feel are quite strange, partly because the earbuds are not really similar to conventional in-ear headphones. I wear in-ear a lot, the feeling at first is that there’s something in my ear. The feeling fades over time as its position does not change as the eartips are firmly embedded in the ears.

With Nuraphone, the eartips will gently push into your ears, feeling like the earcup pressed against your head with that headband. The strongest part will be the earcups, not the eartips. The result is a feeling that is hard to describe, when you walk or shake your head, the eartips of it will also move a little bit but can still be felt.

In addition, the design of Nuraphone is also quite controversial. The silicon earpad is different from the majority of regular headsets. It is feared that silicon will cause the headphones to become clogged and sweat when worn. Nuraphone has overcome that by making earpads from a soft, thin layer of silicon and smart ventilation to keep the ears of the wearer cool.

But don’t confuse Nuraphone with open-back headphones. Nuraphone is one of the best noise-canceling full-size headphones I’ve ever heard even without active noise cancellation.

The world’s leading active noise canceling headphones, like the Bose QuietComfort 35, work by suppressing low frequency sounds, but Nuraphone does that across the entire frequency range. It is a miracle thanks to the design that combines in-ear and full-size.

The finishing quality of Nuraphone seems to be also very good. The headband is made of steel and the earcup is made from electroplated aluminum. Compared to Beats Studio 3 Wireless, Nuraphone is much more advanced. A large line diamond cut above the earcup that reveals the metallic luster is the highlight of Nuraphone.

Nuraphone is a Bluetooth headset but capable of plugging in. The connector on the ear is used for 2 purposes, charging and plugging the headset cord.

By default, the headset only comes with a USB-A charging cable. Other types of cables include: 3.5mm plug, lighting plug, USB-C plug, micro-USB … unfortunately you will have to buy it separately from the outside.

The way to start up the headset is quite strange. There will be no power button, all you need to do is just put on the headset, you will hear the message: “Welcome back, Dave” (Dave here is your name) Only this way you know that is Does my headset work? Many people think that this experience is wonderful and amazing, but I prefer the classic way such as a switch.

Nuraphone’s controls are also very different. Each part of the earcup knob is the touch control. You can program in the application comes with functions such as changing personal audio profiles, switching bass mode or stopping / playing music, changing tracks or increasing or decreasing the volume. Nuraphone will vibrate feedback when you touch, just like when you interact on a smartphone. Quite interesting and clever.

The wireless connection performance of Nuraphone is very good. Nuraphone supports the aptX-HD standard so you can have lossless asymptotic sound quality if you have a good source.

The most important part of Nuraphone is the ability to customize the sound. This feature works based on the principle of headphone response measurement called Otoacoustic Emission. To begin with, the software included with Nura will run a series of sound waves. The microphone on the headset then captures feedback from your own ears. Nura app will process this data in a few minutes and automatically generate a personal profile for you.

The application will let you choose between your personal profile and the default default profile. I tried comparing my Nuraphone audio to another friend’s profile, resulting in a completely different sound. The treb band is pulled back and the mid range is pushed up. Each person has a separate audio profile that is what makes Nuraphone different.

The app also gives you an option of a feature called Immersion, which lets you improve the bass range on your headphones. Nuraphone’s special structure consists of 2 speaker chambers containing 2 separate speakers. Small speakers for the mid and high range placed near the ear and a large bass speaker placed in the earcup. Immersion effect will be applied to this bass driver.

You can adjust the level of the Immersion effect through the toggle bar on the software. At maximum, they can vibrate so hard that the ear ache, the bass is extremely violent. This feature reminds me of the Skullcandy Crusher but Nuraphone’s bass is a notch better.

The Immersion effect may be suitable for bass-heads or for those who like to watch action movies. When listening to music, you should leave this effect low or turn off to sound more balanced.

Nuraphone’s battery life is about 15-20 hours depending on the volume level and settings. Quite comfortable for a full-size full-featured headset.

where can you get a Nuraphone online

In July 2018, Nuraphone received a G2 firmware upgrade. In addition to enhancing the performance of old features, this update also brings Nuraphone a lot of cool new features. One of the most outstanding features is the active noise reduction.

Nuraphone now promises to be a very powerful noise-canceling headset. Due to a special wearable structure, Nuraphone has stronger sound insulation than any regular full-size headset. Now adding the digital noise processing system makes the sound on this headset even more different.

Fortunately, we also have a “social mode” function, which allows you to hear surrounding sounds without removing your headphones. This feature is similar to the Ambient Sound on Sony WH-1000XM3 very smart and convenient.

The new update adds single-tap and double-tap features that extend Nuraphone’s control. You can assign commands like increase or decrease the volume or switch tracks thanks to these new gestures.

As a result of personalizing the audio profile, you may have a different experience on your Nuraphone when compared to others. However, the sound quality that Nuraphone aims for is not ordinary.

My audio profile on Nuraphone gives the sound quality close to that of Audio-Technica ATH-MSR7 but no longer the sharpness in the high-mid and treble bands are softer, the sound becomes quite relaxing. The treb range when compared to the Sennheiser Momentum 2.0 is on a level, the treb is brighter and the details are better.

Maybe the color of each profile is different, but in factors such as dynamics, separation and soundstage are inherent things that make up the basis of a headset like Nuraphone.

With a super-large bass driver and a separate mid-treb driver, Nuraphone gives a sound the width of a full-size. The bass is energetic and very polite. You will not be the phenomenon of flaring bass or striping like cheap headphones. The bass is less likely to change when you switch different audio profiles due to the effect of the mid-treb band on the tones. I will not call the sound quality of Nuraphone on par with the Monitor headphones because really, Nuraphone is aimed at the general audience, where people are more likely to love and be impressed by the bass more. The mid and treb bands give pretty good detail, but you need to focus on listening to realize it.

Due to the in-ear mid-treb driver structure, vocals are concentrated in the middle and a bit thinner when compared to conventional full-size headphones. In return, the soundstage and sound image is more spacious and has a lot more depth than inear headphones.

Nuraphone is a special headset, far different and outstanding in the headset market. The combination of the design of an in-ear headset and a full-size headset seemed like a joke but it was real, and it worked well.

If you are a tech-loving, adventurous, need a strong noise-canceling headset to travel and do not follow audiophile, Nuraphone is an excellent choice for you.