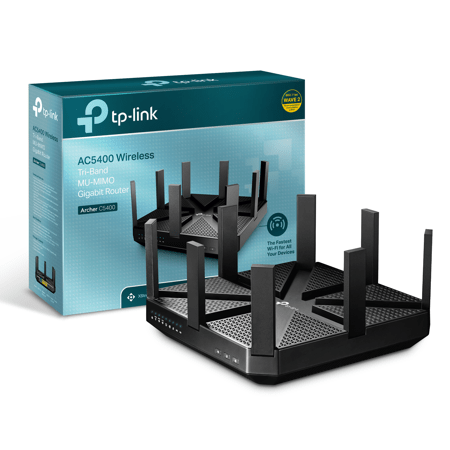 The Archer AC5400 is one of the most advanced routers of the TP-Link brand with powerful wireless broadcast features such as support for up to three separate bands for more connected devices, MU-MIMO technology. 4 times higher efficiency, advanced NitroQAM technology enhances WiFi quality, equips up to 8 antennas maximizing WiFi coverage and enhancing WiFi connection …. Besides, the Archer AC5400 is also equipped with 1.4GHz dual-core processor and 3 processors that provide fast and stable overall performance.

The Archer AC5400 is not only a wireless routing solution for businesses with authentication features for customers, increasing the speed of connecting NAS devices with the ability to add links via 2 on-board RJ45 ports suffered.

Smart home systems when it supports voice control via Amazon Alexa, IFFF allows the management of connected devices in the simplest way. In addition, the Archer AC5400 is an ideal network solution for professional gamers with NitroQAM technology for data streams up to 2167Mbps on each 5GHz band and 1000Mbps on the 2.4GHz band.

The TP-Link Archer AC5400 comes to users in a large-sized container with the full image of the device. In addition to the tp-link brand logo are advanced technological features of the product.

On the back, are brief explanations of Archer’s key technologies and features AC5400

The accessory comes with quite simple products including 1 RJ45 network cable, 1 power adapter and power cable.

With a powerful and feature-rich device, the need for a power source is strong enough to ensure a stable product is needed. The Archer AC5400 comes with a 60W power adapter provided by a very well-known brand of power source Huntkey.

With a device packed inside too much hardware, it’s no surprise that the Archer AC5400 is much larger in size and weight than other mid-range wireless routers. The Archer AC5400 has a size of 230 x 230 x 43 mm and the total weight of the device is up to 2.7kg. This device is equipped with up to 8 broadcast antennas and each antenna can be neatly hidden under lines on the device.

In order to ensure stable operation for a long time, the Archer AC5400 housing is shaped with a lot of air vents. Inside the device is the 1.4GHz Broadcom BCM4709C dual-core processor and 512MB of RAM. With Broadcom processors, the Archer AC5400 also inherits the latest NitroQAMTM technology from Broadcom and 4 data streams per band to minimize latency when playing online games as well as maximum theoretical bandwidth up to 1Gbps for 2.4GHz band and 2167Mbps for each 5GHz band thereby giving the device maximum bandwidth up to 5334Mbps as its AC5400 name.

A high-end wireless router can not fail to mention MU-MIMO technology, this technology allows data transfer at the same time to 4 connected devices, minimizing the time the device waits to receive data, increasing amount of bandwidth for each device and make each thread work more efficiently.

The front of the Archer AC5400 provides a full range of indicator lights that indicate the status of the device including (from right light):

The back of the Archer AC5400 is where the device’s connection ports are located, including:

And the power adapter port.

In addition, the Archer AC 5400 allows you to double the bandwidth of NAS systems when using two RJ45 network ports at the same time for NAS devices, for a total bandwidth of up to 2Gbps. The Archer AC5400 is also equipped with the Beamforming feature that detects the location of your connected devices and focuses the Wi-Fi signal strength towards these devices. This makes all your connections more efficient and stable.

where can you get a TP-LINK ARCHER AC5400 online

Although there are many features and technologies inside, the configuration of the Archer AC5400 is extremely simple, there are two ways for users to set parameters for the device through the web interface in the browser or through TP-Link Tether application.

Set up via web browser:

It should be noted that in order to access the device, users need to create a login account and be stored on TP-Link’s cloud system, whether it is accessible on the web or on Tether app, .

The wireless broadcast performance of TP-Link Archer AC5400 is impressive. As the router layout as well as the location where we in turn try the broadcast capability of the device. Configuration includes a PC directly connected via the RJ45 port of the Archer AC5400 and using a laptop with a WiFi tuner.

With the digital position, the receiving and sending bandwidth is always well maintained at an average speed of about 80Mbps. In the remaining positions, the bandwidth has decreased slightly as in position 2 with the average sending and receiving data rate of about 60Mbps, especially with the number 3 and 4 positions of bandwidth is almost no different than when the router is close to 78Mbps.

Particularly, the 2.4GHz band has changed quite a lot in each position, but this is not much effect for web surfing, watching youtube even playing online games on mobile.

In testing with the Archer USB port AC5400 tried watching movies at 1080P resolution for very good quality, with no lag or sound distortion, although there was still some time left 4-5 other mobile devices are connected to access internnet.

The TP-Link Archer AC5400 deserves an option for high-end households, small office environments and cafes. Stable and robust broadcast quality will ensure you have enough bandwidth to experience online or livestream video games via a wireless connection without having to worry about a drop in performance.

One of the highlights of the TP-Link Archer AC5400 is that configuration and installation is very simple and fast, with a very intuitive and user-friendly interface, whether in the browser or in the Tether application.