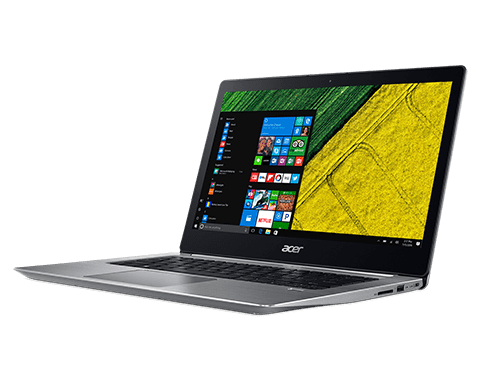 Intel has officially introduced the 8th Core i CPU line for laptops under the name of Kaby Lake Refresh and very soon Acer has introduced an upgraded version of its Swift 3 processor chip. the latest generation of Intel.

Recently, I was borrowed Acer and experience fast Acer Swift 3 is equipped with 8 th CPU Core i.

The Acer Swift 3 retains the same design as the one that was launched at IFA 2016, still lithium aluminum, slim, luxurious. However, the surface of the machine is Acer Swift 3 2017 is modeled scratch different from the previous version, in addition to the Acer logo is placed on the middle of the machine.

Similar to the Aspire A515 recently introduced by Acer, the new Acer Swift 3 2017 has a new change that is the cut diamond lines running around the machine, touchpad and fingerprint accents. Diamond cut on the machine looks pretty on the background is blue, but you also have to keep it careful to preserve the beauty of the machine.

The mirror screen is one of the noteworthy points, giving the machine a more luxurious appearance, along with the same IPS substrate for good colors and honesty. In addition, the Acer Swift 3 is equipped with Color Intelligence technology, a proprietary technology that adjusts gamma and saturation in real time, optimizing screen colors, brightness and saturation.

The bottom of the screen is a solid hinge that is quite solid and can not be opened with one hand, the highlight is that the Swift logo will be run up hinged, which is common with today’s Acer devices.

The Swift logo is placed along the hinge

According to the specifications from Acer, the Swift 3’s Touchpad is placed under the Corning Gorilla Glass, for gentle touching, and thanks to the glass, your touchpad is guaranteed to be unclogged like the existing cover. Other laptops, and it also fully supports the swipe gestures on Windows.

Acer has increased the size of the Swift 3 screen from 14″ to 15.6″ to help Acer place the FullSize keyboard on this machine, refining the layout a little bit where the keypad, the key to the acceptable level is not too shallow. And the feel is quite similar to the high-end machines, which also have backlight support with on / off mode is very worthwhile for the 15.6-inch machine.

Interior are more interlaced for design. Edge must be pasted the information as well as highlight features of Swift 3

The loudspeaker is ported to the front underneath the same machine as the Acer-A515 brother, giving good quality detail, as well as a resonant-enhancing resonance effect, and it is perfectly suited to your needs. The music player of the office people, with soft music, create space after the stressful work.

The bottom side, according to myself, has improved significantly towards better than the previous life. Acer changed the Swift 3’s rubber feet to form bars in the corners and utilized the bottom of the heat sink to place a longer foot, which made sure your machine did not slip and otherwise provide a good lift angle to help heat dissipation better.

where can you get a Acer Swift 3 online

The current Acer Swift 3 is the first laptop in Indochina to feature the 8-core CPU Core i. After about two days of experience, Intel Gen 8 is one of the upgrades I consider to be appropriate and worth the upgrade. The most interesting note at the moment when choosing to buy a laptop with power consumption on the Core i 8 Gen Core is still 15W as compared to the older generation but the performance outperforms significantly with the large processor cores than.

Performance has been increased significantly, as well as the built-in graphics that are significantly stronger and comparable to NVIDIA’s 910M / 920M.

Intel says Kaby Refesh will be much faster due to increased processing coil, improved computational efficiency, and improved processing of tasks. With the i5 / i7 you will have up to 4/6 core processors supporting HyperThreading, which will provide twice as much processing power for your device.

Not only for the office, but for students who study design of a laptop for learning to render, the performance of the Acer Swift 3 is also worth to choose when the Cinebench score of the Intel Core i5-8250U is slightly better than the Intel Core i7-3840QM.

One thought on “Acer Swift 3”