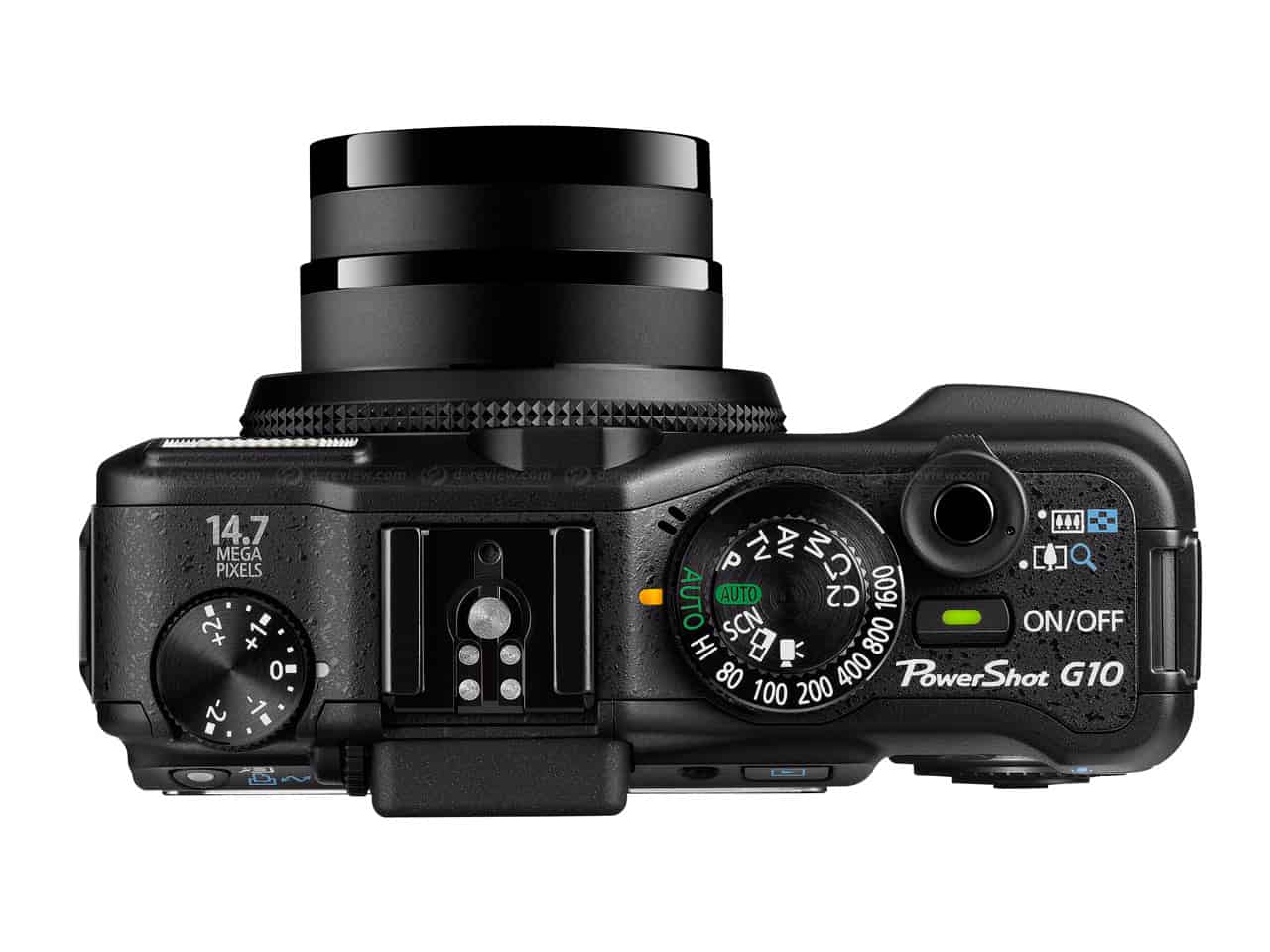 Canon PowerShot G10 is also rated “better” than rivals. This is the first model of Canon G series with 28mm wide angle lens, 5x optical zoom, not too inferior to 24mm lens, 2.5x optical zoom of Panasonic LX3. Not only that, the G10 is also upgraded to image sensor and microprocessor.

In terms of design, the Canon PowerShot G10 is the largest and most bulky semi-professional travel camera. Putting the G10 alongside the G9 and Lumix LX3, one thing is clear: the “waist” of this new machine “flourishes” than its predecessor, which also increases the weight of the machine. This is explained by the fact that the G10 owns a 5x optical zoom lens inside.

Apart from that, the G10’s appearance looks very much like the G9, which, along with its black, rugged, and very “black” The handle of the machine is quite large and is coated with a rubber layer, help users hold the machine very firmly. Compared to the G9, this is a very welcome upgrade, but it would be better if Canon equips the device with a spacious thumb on the back.

The most significant change in design on this machine compared to the predecessor is the top of the machine. While the G9 has only two wheels to adjust the ISO and to select the shooting mode, the G10 is provided by Canon with a third wheel, which changes the brightness compensation faster. And to make room for this third wheel, the manufacturer has designed two ISO wheels and overlapping shooting modes, but still enough space for the user to manipulate.

The layout of the joystick on the back of the machine has nothing to change compared to the G9. The position of the keys as well as the icons remain the same, only in that the size of the keys is greater than in the previous generation.

Compared to the rival Panasonic Lumix LX3, the appearance of the Canon PowerShot G10 looks more impressive with professionalism at the first glance. However, the layout of the joystick in the LX3 is more convenient for users, while the wheel to select the mode is also easier to use. In return, the Canon PowerShot G10 owns a large handlebar, providing more comfortable and secure for users when holding the machine.

In terms of features, one of the most notable upgrades to the G10 is the lens. Although parameters such as 28mm wide angle and 5x optical zoom are not as great as the general picture, it shows that Canon is listening to and responding to the needs of its users. Compared to the LX3, the G10 is less capable of shooting wide, but can zoom more than double.

Besides the lens, the resolution of the sensor was also raised by Canon to 14.7 Megapixel, compared with 12.1 Megapixel in G9. The LCD remains the same size as 3 inches, but the resolution is doubled (460,000 versus 230,000 pixels). In addition, the G10 is also equipped with the same features as the predecessor such as optical image stabilization system, face detection technology and allows users to adjust the focus point. The camera also owns many of the default capture mode and custom features.

where can you get a Canon PowerShot G10 online

The Canon PowerShot G10 is talked about much because the machine is equipped with many professional features appeared in the Canon DSLR. The first is the Picture Style feature, which allows editing of parameters such as color tone, color saturation, sharpness and contrast on the machine. Also included is the Digital Photo Professional (DPP) software, which handles RAW images.

Also, like the new Canon cameras, the G10 is also equipped with a DIGIC 4 image processor. As a result, the autofocus speed of the camera is faster than the previous model, The color and the width of the contrast range are also improved, providing better quality for the photos taken.

Canon PowerShot G10 uses a lithium-ion battery with a capacity of 1050 mAh, support SD / SDHC memory card. The machine is not equipped with internal memory.

The G10’s performance speed is fast, taking just 1 second to boot, while the Panasonic Lumix LX3 takes 2.2 seconds. The shutter lag measured only 0.1 seconds, equivalent to the opponent. The total time from powering on to shooting the first photo in favorable light conditions is 2 seconds, if lack of light will take about 4 seconds. In sequential shooting mode, the camera can shoot at the same time 20 images at 2 frames per second. Canon PowerShot G10 focus speed is also quite fast.

The quality of the photos taken with this camera is generally good, although there are still some points that need to be improved. From ISO 80 to ISO 400, the images are quite nice, with very few details of photos, in which photos taken at ISO 100 are the most beautiful and natural. If you are required to capture high ISO, users should not exceed ISO 800, as the image will not retain all the detail and noise. Compared to the LX3, images taken by the G10 are sharper, but they make the image feel too much, not real and natural.