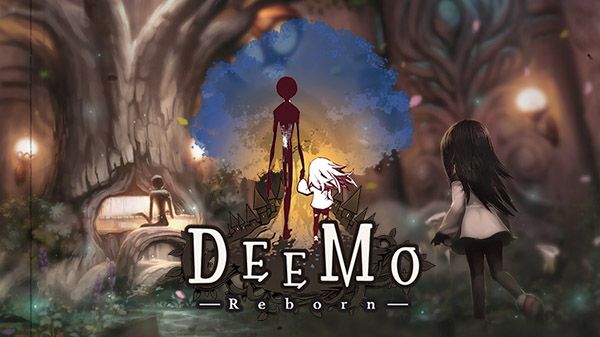 Right from the first cutscene, Deemo: Reborn reminded the classic opening of the series that … let a girl fall from the sky straight into the arms of a black creature.

However, instead of just playing music from one version to the next and wait to see the cut scene. Deemo: Reborn has a role-playing game and … a lot of speech (compared to the old version).

The core story of the game has not changed but the way the story is narrated has been made a lot more skillfully. For example, small details about Deemo and Alice’s true identity, who the masked girl is, the reason why Deemo wholeheartedly helps Alice … will be scattered throughout the game.

I really praised the “easter eggs” that were inserted by the manufacturer, for example the books in the library full of metaphorical details of the real-life Alice in a coma about the seedlings and the father trees …

Deemo: Reborn brings players extremely confused with the so-called “Easy Mode” – each of these “easy modes” only makes the player sweat and not to mention the other two modes (of course it depends on the level of the music.)

The difficulty of the game is not due to the game deliberately puzzling the player but it is at the core of the game. Most other music games like Project Diva or Taiko Master are easy for beginners to use quite a few buttons.

Meanwhile in Deemo: Reborn, even if it is in Easy Mode, you have to use both buttons plus the L, R keys on the handle (for other games, this is from the average difficulty upwards). For the first time or less playing music game genre, it is difficult to catch up the rhythm when using both hands.

After going through about one third of the game, getting rid of this magical music is difficult.

Complete the song at a higher difficulty level, the faster the tree will grow and the sooner the game will end. In fact, you don’t need to complete the hardest level or try to get 100% of the song (and it’s not easy to do this), if you just play at the level of enjoyment, just need to play the game as usual, when the tree reaches a certain height, the new storyline will be opened.

To own new music, you can puzzle or they will be scattered as you follow the story. If you’re worried that the game has too little music, rest assured, Deemo: Reborn will own more than 290 abundant songs for you to explore.

Each song in Deemo: Reborn brings different levels of emotions, from boredom, sorrow, lightness to fun, exciting, strong, violent … ensuring you will play forever and not bored.

It is also a bit sad because the game’s tones keep a depressing tone throughout from beginning to end. However, the game still does not lack small, happy moments “warm in the heart”.

where can you get a Deemo Reborn online

The most impressive for me is the story of the flower picture, seeds planted, sprouting through rain, sunshine then growing and changing for snow, as a human life cycle, strong with the years.

Humanistic lessons hidden into the jokes of the pink spirit, the messy things in Deemo’s room, Alice’s childish questions and the selfishness of the masked girl, all creating emotions that are hard to express.

Sad but not boring, the story in Deemo: Reborn is not philosophical but very natural, it is the mood of a lost girl that is the pain of losing a valuable thing, which is thing anyone can encounter.

Deemo: Reborn is like what do you know about yourself? What do you understand about other people’s sacrifices for you? What would you do if life forced you to grow up? If you have a reason, would you be allowed to be selfish? …

It is difficult to answer such questions but through Deemo: Reborn, perhaps you will also draw a small lesson for yourself.

The first annoying thing is the part where Deemo: Reborn was promoted right from the first trailers – virtual reality (VR).

Actually applying VR to a music game is not uncommon, we have had quite a successful game in combining these two genres, Beat Saber.

However, the VR mode in Deemo: Reborn is quite difficult to perceive, pressing the buttons on the flat screen is hard to say in virtual reality.

The camera in the game is also quite “crazy” because most of the interaction with the environment is locked with the camera, and when using PS VR, with getting used to movement. So after 15 minutes of VR game experience, I had to give up with this mode.

Called a graphics upgrade, but in fact, the graphics in Deemo: Reborn are quite rough (maybe due to the extra VR) and everything is always fuzzy whether it is playing in TV or VR mode.

The character movement is also very slow and expressive, very little despite the fact that only Alice is expressive.

Although very impressed with the metaphor and sending messages to players through the environment, the puzzle part of Deemo: Reborn is not really convincing.

The game seems to follow the classic style of early puzzle games like Zelda, the type of player who has no hint at all during the puzzle process.

Because the player does not feel any challenge, the puzzles in the game become redundant, but even if there is a challenge, you only need to play music to grow the tree to the required level go on the plot.

In addition, the game still has some minor errors such as frame drops in some segments, long loading game, unable to customize buttons …