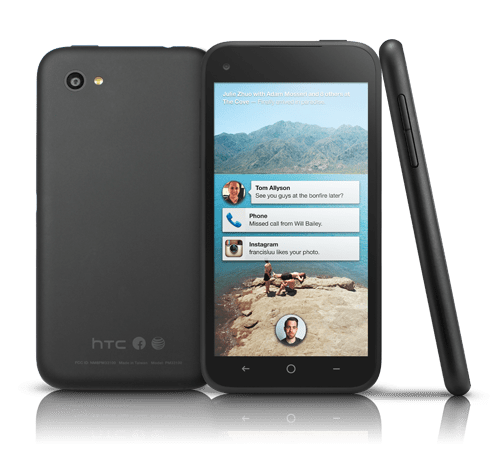 In terms of technical specifications almost HTC First is not attractive enough to consumers. But HTC and Facebook are hopeful that users will have a new experience with the new Facebook Home interface. Especially when Facebook is the largest social network in the world. But taking advantage of Facebook screenshots really helps HTC First score points in the user’s eyes.

HTC First has a really compact and simple design. The 9 mm thickness still gives the user a comfortable grip with one hand because of the curved edges. At first glance, the First smartphone reminds us of the Apple iPhone 3GS. These two smartphones have sharp rounded corners and the hard drive position is quite similar.

First of all, instead of the glossy back like the 3GS, HTC First uses a “safer” solution than the polycarbonate case. Android’s first touch pad has a home button with a pretty circular icon. You can double-click the Home button to enable multitasking or keep a moment to open Google Now.

The design of First does not bring emphasis to the emphasis on luxury like the Apple iPhone 5 or HTC One. In return, First goes into the practical experience, simple but most important is easy to handle and sure. The back of the machine never worries you that it will leave your fingerprints or uncomfortable. But this slightly monotonous design can not make a point for HTC First. Users on a glance may not equate this is a cheap phone model, but it is difficult to see immediately that it is a product of hand manipulation of Facebook.

HTC First owns 4.3-inch S-LCD screen with 720p resolution. No need for 1080p resolution, First still gives the ability to display very clearly with the density of up to 341 ppi. The ability to reproduce true colors with First’s neutral colors is excellent. However, the downside is the screen brightness is quite low so the observation in the sun will be relatively difficult.

First view of the screen is quite wide, tilted at an angle of about 90 degrees but you can still see the text is showing. Overall, the HTC First’s display fully meets the expectations of everyday use. With the size of 4.3 inches, you can fully accept the quality of 720p resolution.

HTC First can run the Facebook Home interface or the original Android interface of Google. You can easily select one of two sets of this interface in the Settings. Original Google interface 4.1 Jelly Bean is a pretty basic platform, not as features as Samsung Touchwiz or luxury as Socialife on the Sony Xperia Z. But generally still meet the needs of people needs.

Within this article, we will only go into the Facebook Home interface, which is the difference between the HTC First. If you choose the interface to use Facebook Home, the traditional Homescreen screen of Android will disappear to make room for news updates, status or new photos of “Friend” on Facebook users. Or, more precisely, you do not need direct access to the Facebook application to view the information. To switch between items, just slide your finger left or right.

At the bottom of the screen, a small round icon with a user avatar on Facebook appears. You can drag this icon up to open the All Apps view, left to open Facebook Messenger, right to open App Laucher. When accessing the App Laucher interface, you will see a utility bar for quick post status, photo sharing or “check-in”. In addition, you are also provided with an App Laucher panel to quickly open applications that you often use.

It can be said, Facebook Home allows quite deep integration of Facebook application into the user interface. Everything from status, images is updated directly to the home screen of the device. You can either press “Like” or comment very easily right there. However, the layout and display of the News Feed is very messy.

Instead of displaying new words to the old, the News Feed is displayed in no order at all. You are watching a new update but surfing to the right, an old update from yesterday may reappear. In addition, the rate of update News Feed relatively slow. If in the traditional Facebook application, all information is displayed almost immediately, you will have to wait quite a long time for a new News Feed to “go out” the home screen.

If not a person too passionate to use Facebook, you will find this interface has many points are not convenient for basic tasks. Now, to call, text or browse, you will only need to visit the App Launcher to find these apps.

In addition, letting Facebook push new information continuously so that will definitely make the source of the HTC First exhausted rapidly. So when I use reality, I often switch to the original Android interface of Google to work, not too much experience with Facebook Home.

The HTC First is powered by a 1.4 GHz Qualcomm Snapdragon 400 processor with an Adreno 305 graphics core and 1 GB of RAM. Not a hardware “monster” but the machine’s performance is still acceptable. Of course, the machine still smoothly processes basic tasks, but the lag condition may appear if you open multitasking some heavy applications.

The machine has a storage capacity of 16 GB, but the actual use is only 11.96 GB and does not support external memory card. Therefore, you should keep in mind the memory limitations of First especially when installing games with large capacity or HD movies.

HTC First uses the default browser Google Chrome with the ability to surf smoothly, fast even when opening multiple tabs. The handset also supports popular connections like aGPS, Bluetooth 4.0, 802.11 a / b / g / n Wi-Fi, NFC and even 4G LTE.

where can you get a HTC First online

Camera quality is the “fatal” weakness of HTC First. In addition to the 1.6 MP front camera, the camera only owns a 5 MP camera (with LED flash support). As a result, the quality of photos is poor with low detail, poor color reproduction. When shooting in low-light conditions, the image appears disturbed and very blurry.

Likewise, First’s 1080p quality videos are not rated well either. The video runs at a moderate frame rate and the colors are very blurry.

HTC First owns a battery capacity of 2,000 mAh. When enabled 4G LTE network connection, you can use the machine for 8 hours with heavy intensity. On the other hand, if you use HSPA + for surfing the web, sending e-mail, checking Facebook or texting with less intensity, First can last for 15 hours. You can use the full machine in 1 working day.

Undeniably, Facebook Home will bring exciting experiences to Facebook social networkers, but the rest will not appreciate it. With a $ 99.99 contract and a compact design, choosing the HTC First when used with the original Android interface as a midrange phone is quite reasonable.

The quality of Super LCD 3 and hardware configuration of First is quite good but you need to pay attention to the poor quality of the camera. It seems that the creative flow of Facebook is pumped into HTC First is very limited.

One thought on “HTC First”