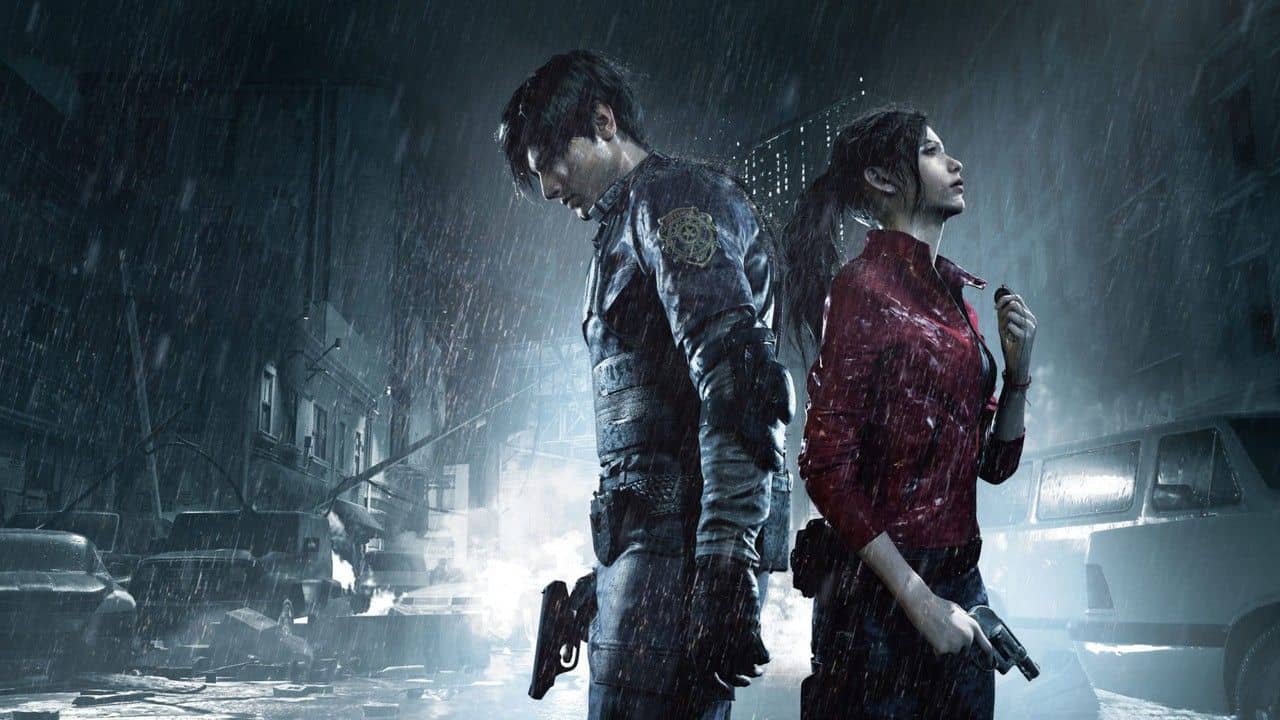 One day after completing both Leon A and Claire B in Resident Evil 2, the tester ran through Resident Evil 6 to see for himself how the game was “evolving” in the 7th generation console. 45 minutes is the amount of time that the writer tried to stay in this game, of which maybe about 35 minutes was a cutscene and the segments pushed the left trigger to let the characters move forward to … watch the next cutscene In the rare time of playing Resident Evil 6, Leon does not hesitate to kick a zombie with just two clicks of RT.

And that is the moment Resident Evil 6 is removed from the hard drive.

Naturally, we want to see our heroes tremble and step by step become more experienced over the years to confront the evil at the end of the road, simply because it is a part lacking in the typical storytelling model “Hero’s Journey”. But, Resident Evil 7 before, and this time Resident Evil 2, showed that maybe this series will be better if it is not woven according to that template.

Calling Resident Evil 2 with the phrase “remake of the 1998 version” is probably overlooked by the efforts of the game makers at Capcom. It can reproduce the spirit and structure of the original game, but the change of perspective is not the only thing built to fit the new “frame”, but retains the old temperament. Resident Evil has never been such a scary horror game that the player jumps off the chair, but it relies heavily on the stressful nature of the pace and distance that players experience.

If the REmake mansion evokes an ancient gothic look with a beautiful pattern beneath the condensed light lines, the Resident Evil 2 police department of Raccoon City hides that form by itself. more than the original as paper desk, office, library. The state-of-the-art graphics technology with true shadow reproduction and fine detail details makes Capcom excellently represent the most … architecturally mediocre scenes possible, until you dig deeper and more realize the different rooms are crystallized from an art museum that turns into a police department.

The areas in Resident Evil 2 can be described in a similar way to the scenes in Hitman: large boxes with maze of obstacles, both static and dynamic, requiring players to find ways to cope. to open the next door. A room containing a key to open another room – that is the concept … blocking the player from spreading almost 100% of Resident Evil 2 content and being cleverly executed at a natural pace . The iron chain blocking the door required a large grip to cut, the path leading to the interrupted clock tower was forced to find tools to help create a new path, a room lacking some door switches could be found in another room that was not so close … it could no longer exude the irresistible charm of classic games, when our rescue heroes had to perform super … trivial tasks to complete into a big responsibility, and inadvertently also created a simple, easy-to-understand and convincing gameplay loop.

The duration of only 6 to 8 hours for a part of Resident Evil 2 doesn’t leave room for anything that can waste a player’s time, and the result we get is a game with full details and tight screen design. The suffocating feeling inside the tight patches is still there, and getting used to the layout of the place you are stepping through is almost a minimum requirement with a high priority for players. You cannot grab any items you encounter on the way by the limited space, then you will remember its location so that the next time you “grab” it when you return (and the game Also deliberately mark them on the map). You stop running hurried through the corridors, instead gently pushing the door to hear if any Licker is wiggling away from his gaze. You stop releasing bullets relentlessly and realize that trying to kill the enemy is a meaningless job.

And just like that, Resident Evil 2 makes players repeat countless useful habits despite being short in duration compared to their common ground, and the almost never-led guide show the instructor’s direction of the game. Between taking advantage of visual cues like light that draws the player’s attention to the path, or as puzzles are always presented with the missing item appearing first so that players understand themselves find something instead of the opposite (you always find a locked door and understand that you need to find the key, not find the key first and then check what it can open). “Stomping on the spot” is not in the dictionary of Resident Evil 2, simply because it respects both the intellect and the player’s attention, not trying to push the challenge unscathed.

Dealing with enemies in Resident Evil 2 is no less coherent. The first rule that anyone who stepped into this game first had to know, it was a zombie who could chew up to 10 9mm bullets and still be able to crawl towards you just like the K-Pop fans cling to Idol. Walk through a familiar corridor for the 7th time and you think you are in a realm of life, until a sudden dead body embraces your leg even if you just gave it a measure of soil 15 minutes ago. Only a small sight is enough for Resident Evil 2 to indirectly whisper to players that a place is only safe when it has no body.

However, that is not enough, how to make players feel more stressed? Simply put, it’s … “nerf” that is the main character. Both Leon and Claire were unable to unleash the same power as the martial arts martial arts master, nor did he own a bottomless pants pocket containing several hundred bullets for his ultimate weapon.

There is no nonsense QTE button to let you get rid of enemy encirclement easily or simply kick a zombie head like kicking a water bubble, or moving smart, or making use of smart weapons, otherwise then “face down” completely. Resident Evil 2 doesn’t have a sneaky kill button from the back, as well as a knife that has durability and will be completely broken after a certain number of times to hit zombies, it is also a proof that it is tired with The silly tricks of the “superheroes” in the junior Resident Evil versions, and made it clear to players that if you try to play Resident Evil 2 in the style of Resident Evil 5 or 6, it’s no different write your testament yourself, and that is absolutely desirable.

Resident Evil: Revelations 2, Resident Evil 7, and so far Resident Evil 2 are gloomy games with the “melodrama” of Japan no longer exist as before. We are talking about a series of games that possess golden moments like two immortal “Jill Sandwiches” coming out of Barry Burton or Chris Redfield punching a rock that could not be more violent, so seeing one more The game does not leave any “unintentional” humorous scenes that are easily sarcastic that makes the writer half surprise, half satisfied.

where can you get a Resident Evil 2 online

The post-apocalyptic world theme was invaded by the living body that has been welcomed by Western game makers in two ways, or turned it into a bloody circus, or turned it into a drama about corruption of humanity. Meanwhile, Resident Evil is not going in any direction, is a series of games that are so influential to the birth of both Hollywood movies and … musicals, but are always censored by the censorship council in the hometown by the extent of Violence is overwhelming, and it is with the leading characters who are loved by fans all the time, making them seem to have “super-thick script” armor – a strange opposite to the context in which, human life as emergency dangerous.

But Resident Evil 2 is probably the first game that clearly shows their slimness, not only in physical but also will. That, combined with voice acting almost “standard” to 90%, seems to be the reason that Resident Evil 2’s content becomes not only close but even more reliable than before, including with conversations written in a boring way.

Resident Evil 2 is a game that prioritizes replay value, but it seems that the case of exchange case has been tucked away somewhere at the end of Capcom’s priority list. In general, you can start the A game with one of the two main characters, and once completed, you will be able to continue the remaining B part of the character with a timeline in the same time.

The problem is that the changes between game A and B can be counted on the fingers. The writer was really surprised after completing Leon Route A and continuing Claire Route B and then realizing it was 90% critical in setting up the scenario and the game screen was constant, and they caused a logical logical contradiction. Extremely large reservations because the game clearly emphasizes that these two play pieces occur at the same time.

Both experienced similar segments, hitting the boss, solving the same puzzle with sometimes changing a few small steps. The character’s action caused by Route A did not leave any difference for the Route B game, most of the biggest game changes in the two control segments Ada Wong and Sherry, which only took place in about 15 minutes to change the wind is the main. The writer does not know how this mechanism works in the original version 1998, but the way it works in Resident Evil 2 period is really a huge waste potential.

Finally, a formidable opponent in Resident Evil 2 comes back – Tyrant, also known as Mr. X. He chases you with fiery footsteps, and will always punch your mouth if you are within reach. And of course, without any ammunition can permanently kill him. Your only option is … running.

Mr. X appears when players are familiar with how to deal with basic zombies, helping to create a new source of “mental torture” so players don’t feel too comfortable while traveling between police departments. However, it does not take much time for the writer to recognize Mr. presence. X is no different from a hired debt collector who is clinging to his tail for a long time, not to make the player really frightened. The reason is that because of his extremely simple way of avoiding him, he is easier to lead the nose than the lamb and the player does not receive any reward after temporarily taking him down. The only challenge he brought was to make the player loop around a bit longer, at the same time tempting him to into Licker’s area.

One thought on “Resident Evil 2”