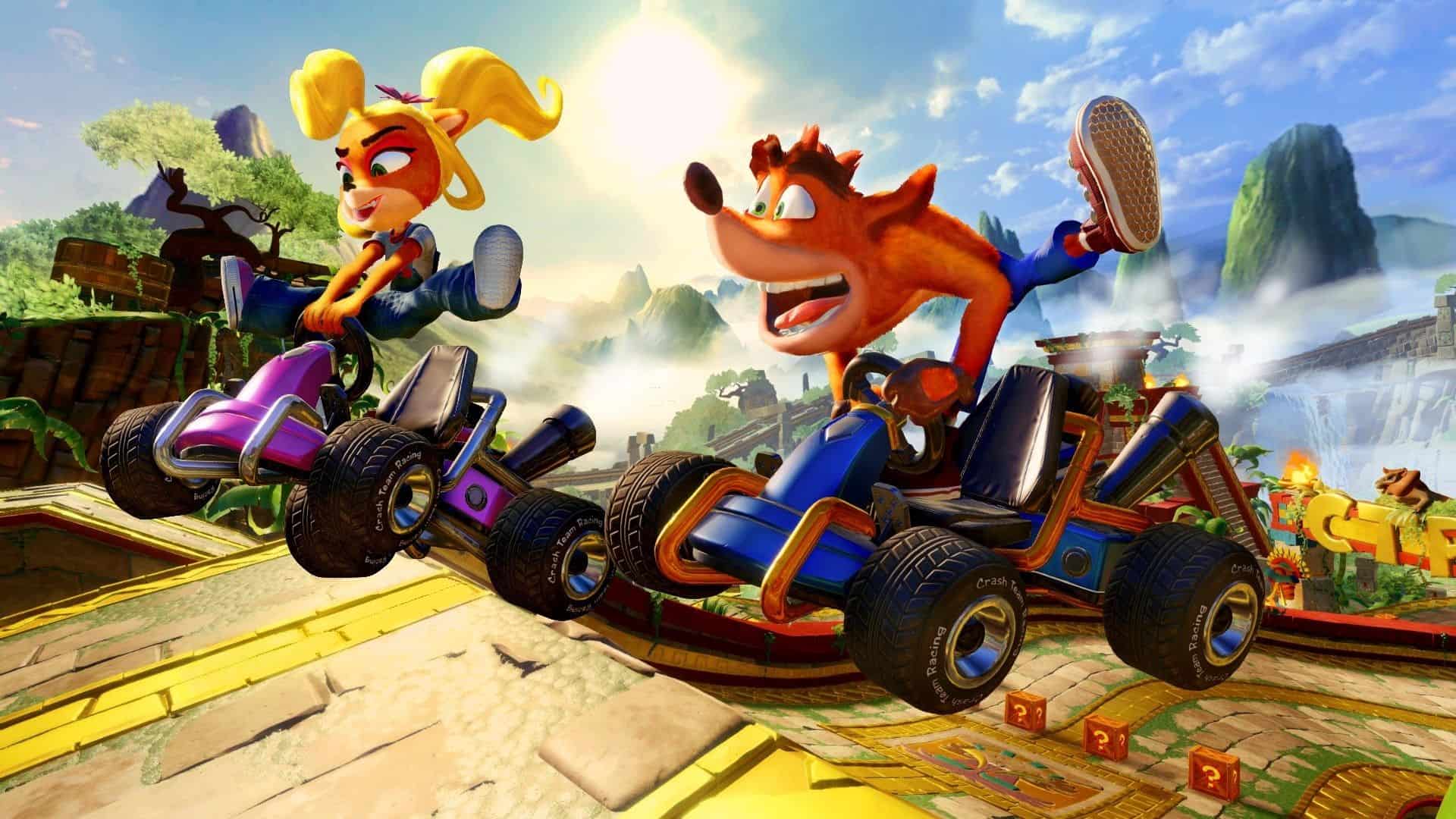 One of the best points that Crash Team Racing Nitro-Fuel brings is the complete transformation in terms of image but still retains all the most elite things in the old version. You will meet all the extremely familiar faces in the world of Crash Bandicoot with 26 characters (and in the future) in the new look, no longer the rough polygons you have ever experienced on PS1, instead of the silky lines of Crash and Coco’s fur, each vivid expression of the old Neo Cortex …

Crash Team Racing and Crash Nitro Kart races are also reproduced in more detail than in the old days with more special effects but still bring the original soul. If you are like a writer, you will definitely remember the beautiful Polar Pass game with the snowy mountains in the distance. With Crash Team Racing Nitro-Fueled, this screen is redone with a snow effect with plenty of vivid details, such as roadside wooden houses or DJ bears and penguins jumping around …

New to the game is the ability to allow players to customize their characters and cars. You will unlock the outfit or parts for the vehicle when completing certain conditions or purchase in Pit Shop.

Players will gain gold after completing the race regardless of winning, single player or multiplayer (of course, playing online will earn more money). With this amount of gold, players can go to Pit Shop and buy the items you want during the day, the rarer the item, the more money you need and the more random rotation every day.

Except for the Crash Team Racing Nitro-Fueled image that has been changed to be more gorgeous, the rest of the game has been reproduced almost by Notox.

You will experience the adventure game mode with more than 20 childhood screen with lots of bosses waiting for you to defeat to unlock. What’s new this time is that you can choose to use Nitro-Fueled gameplay (you can freely change the character and customize the car with decorations during play) or classic play (mandatory selection) a character and vehicle of that character from beginning to end without being changed).

The writer himself felt that being able to change the character would make the process easier to breathe, help you choose other characters more suitable for each stage or freely experiment each character to see who will suits you.

Like many other kart racing games, You will choose one of more than 26 characters to participate in the race, each character will have different stats in terms of speed, acceleration and crab break. Your mission is to complete the race in the champion position to win. The track will be shorter than the usual racing games, possessing many obstacles and different types of support items so that players can take down the enemy and gain an advantage on their side.

To be able to accelerate, except for using items, the game also has Power Slide and Turbo Boost. Power Slide is a turn-key mechanism that helps your car jump into the air and prepare to surf when touching the ground. When surfing, you will see the Turbo Boost bar is pushed up and can be used to activate Turbo Boost when the bar hits the red mark.

Turbo Boost will help you accelerate significantly in a short time. If Turbo Boost successfully activates three times in a row, your speed will be greatly increased and the acceleration time is also significantly increased. This is an extremely complex mechanism that requires players to spend hundreds of hours on the game to practice, but once you are proficient, you will almost be able to beat every opponent in the game.

However, it is impossible not to “remember” to the unbelievably difficult level in the single-player game when, at normal difficulty, all the remaining riders can easily smell the smoke with Power Slide and Turbo Boost phases.

Besides, Crash Team Racing Nitro-Fueled is great to keep the tradition of supporting split-screen play, allowing up to four players simultaneously on one machine. This is a good point when the number of games supporting this feature is increasingly rare. With this feature, you can quickly join the fiery races with family and relatives. In addition, the multiplayer feature is also supported to compete lowly against other players in the world.

Perhaps owning too shiny graphics sometimes is not a good thing when Crash Team Racing Nitro-Fueled can’t keep the frame stable. Typically when players use Turbo Boost continuously at some screen play positions have detailed and complex designs.

However, the frame fluctuation at these moments is not as obvious as when using screen split mode. The more players that connect to the same machine, the faster the game will “erode” the hardware of the console and cause the game to drop dramatically.

where can you get a Crash Team Racing Nitro-Fueled online