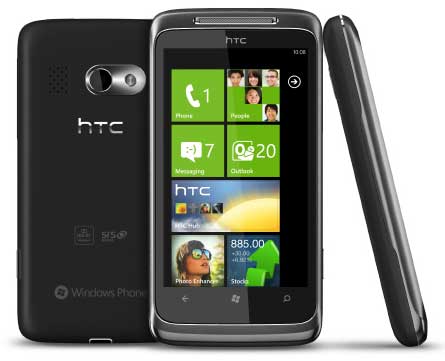 Basically, the size of the device is similar to the HTC smartphone generation of the same generation. The 3.8 inch touch screen, weighs 165 grams and has a thickness of 13 mm. High-grade plastics are chosen as the main material for the frame.

The point really appears when the loudspeaker runs longitudinally as the body slides up. At this time, HTC Surround becomes attractive as a high-end digital music player. In addition, the metal rear stand helps keep the device stable while displaying entertainment content. This is actually the HTC made at HTC HD7, a little different in how it is done

Speaking of internal hardware, HTC Surround is manufactured by Qualcomm Snapdragon QSD8250 processor 1GHz, 448MB RAM, 512MB ROM and up to 16GB of storage space. Unfortunately, do not dream of finding the location of the expansion card on your phone.

In addition, the camera comes with a resolution of 5MPx (one camera only), supporting small LED flash. All placed on the metal structure that emerges from the back of the machine. The camera has the ability to shoot 720p HD video quality average.

Particularly at speaker design, things are more concerned about HTC Surround. The initial feel is sure to convince the user. The mobile speaker system is certified with Dolby Mobile and SRS WOW HD.

In fact, the maximum volume is not too great, but the quality is very impressive. Combined with the exclusive music software Microsoft Zune, the ability to slide movies on the S-LCD screen resolution of 480 x 800 pixels. The mobile entertainment experience that the manufacturer aims to convince even the hardest customer.

Limitations, choose high-quality entertainment as a focus target, but HTC Surround is a bit stingy when only introduced 1200 mAh battery capacity. In addition, the machine does not support the expansion of memory capacity is also difficult for the user.

where can you get a HTC Surround online