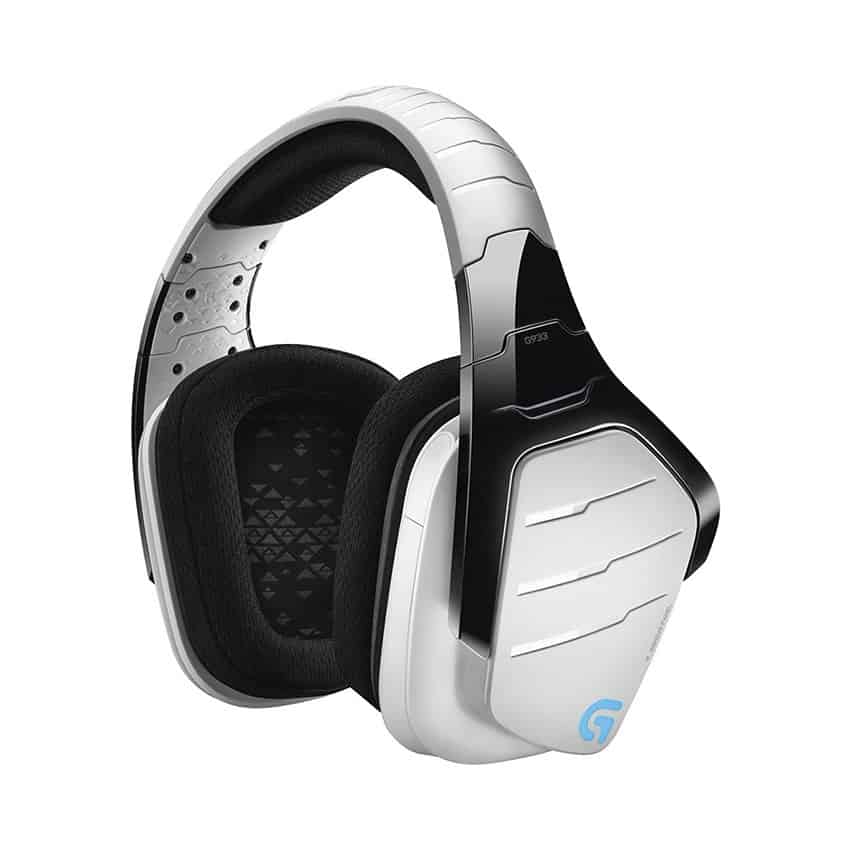 The Logitech G933 Artemis Spectrum 7.1 Wireless headset is one of the most notable high-end gaming headsets of all time. Recently, this product has ‘revived’ at a very attractive price.

Particularly, the USB Receiver for wireless mode is ‘hidden’ in the headset, which is quite difficult to find, but also a unique point of Logitech G933 Wireless to confirm that the headset can be carried around very conveniently.

The design of the Logitech G933 Wireless still retains a very distinctive and eye-catching ‘fashionable’ look, completely not following the recent trend of perfect minimalism. This is the ‘quality’ of this headset and can never be confused with other brands.

The control buttons are very convenient.

When turning on the Logitech G933 Wireless, there will be LED lights on both sides of the headset as well as the Logitech G – Gaming series logo, which looks very nice, overall creating a very high-tech, very futuristic style.

The housing part of the Logitech G933 is extremely large, and the ear cushions are also very deep, covering the ears for sound insulation and comfort.

Going deep into the design, it can be seen that this headset is very solid with a metal frame. The outer shell of the headset is a combination of glossy and lumpy plastic, the glossy plastic part is quite luxurious, but it is easy to stick to fingerprints and must be cleaned regularly.

In addition, the joints of the headset are also very flexible and the decorative motifs are of excellent quality, beautifully finished without any excess plastic.

Logitech G933 has a design that is easily removable by ‘attaching’ with a magnet, one side is the previously introduced USB Receiver slot, and the other is the battery compartment. The valuable point here is that the battery can be easily replaced when damaged and this is a big advantage compared to many other wireless headphones.

The Logitech G933 has a very balanced sound range, easy to use for all purposes from gaming to listening to music and watching movies. Of course, the strength of the product is still in the virtual world with high detail, and the ability to reproduce super good space with a 7.1 surround sound system. But the balance in both high, mid, and bass bands offers a more diverse application.

Because it has to ‘burden’ the battery, the Logitech G933 is relatively heavy when compared to wired headphones, but it is normal with wireless products. Anyway, with a smart design, and soft cushion, long-wearing is still not uncomfortable, completely ‘fine’ for fighting games for many hours.

where can you get a LOGITECH G933 ARTEMIS SPECTRUM 7.1 WIRELESS online