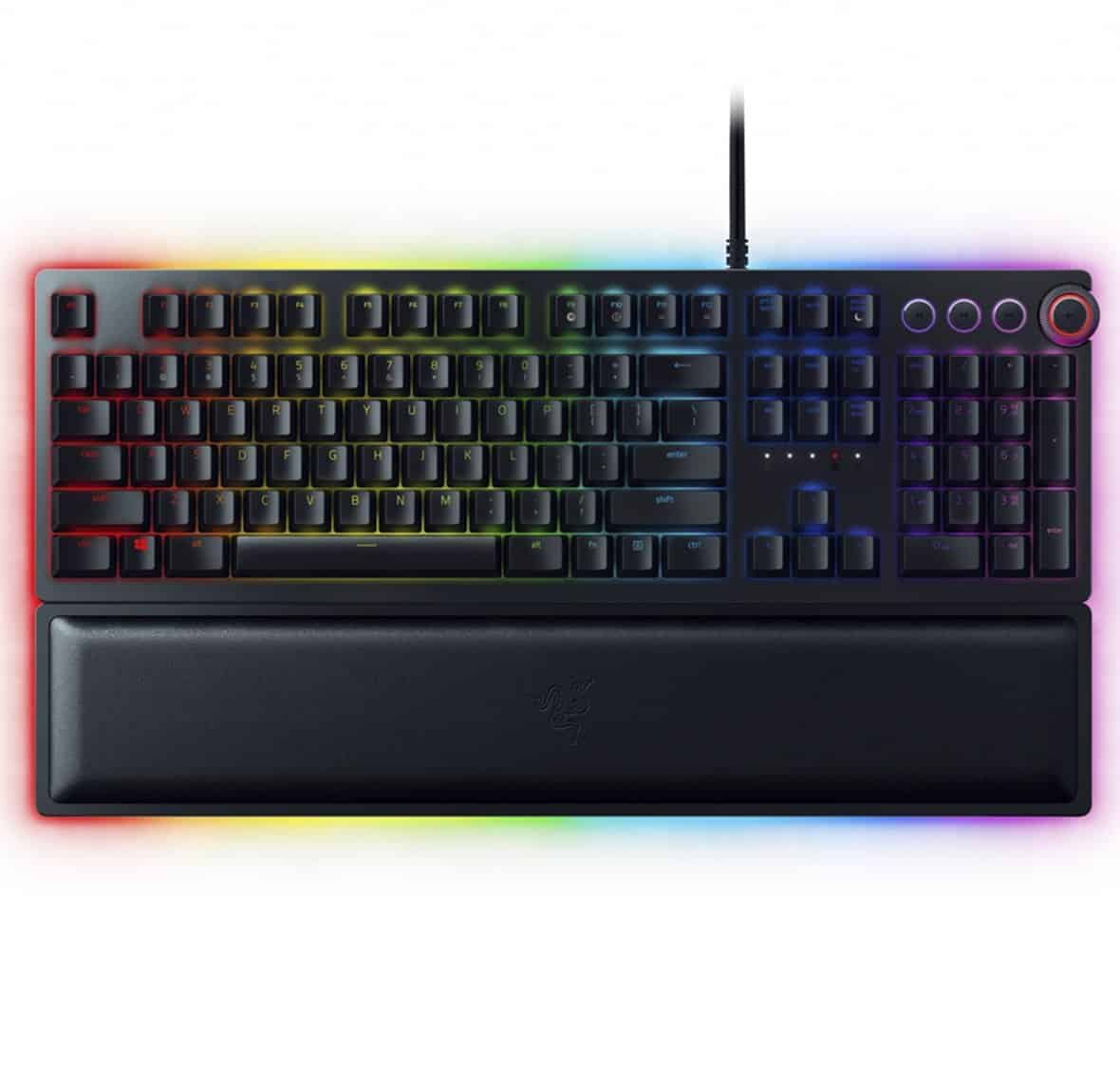 The Razer Huntsman mechanical keyboard with an optical switch is one of two representatives of the new generation of Razer mechanical keyboards (besides the Razer Huntsman Elite mechanical keyboard with extra armrests and many other features). The mechanical switch remains the same, but there has been a specific change in the signal receiving step with the laser system instead of opening / closing the circuit according to traditional mechanics. So what is the benefit of this technology that makes Razer give up on traditional mechanics, which has been a long evolution from the original BlackWidow since 2011 to present? Is Razer in need of a revolution to change?

Right, Razer for years seemed bored by itself because nothing was new. Besides, the reputation of “leading technology” has now been invaded by too many strong competitors in the industry. Although participating in the world of optical switches is not the earliest, Huntsman has also made the world of gamers debate as “exciting” as in the old days the Razer BlackWidow mechanical keyboard “transformed” to the mechanical switch the tradition of Kailh.

On the Razer Huntsman Opto-mechanical keyboard, we have a tactile switch that is quite close to the top of the travel, meaning we will feel the response of the keypress as soon as we start pressing down the same clicky sound (similar to CherryMX Blue, but the journey is like TTC switch in Roccat Suora).

If the Cherry switch has tactile and receives signals at about 2-2.2 mm on a total trip of 4 mm, the Razer Opto-mechanical takes the signal at 1.5 mm on the 3.5 mm trip. At CherryMX or similar switches, all receive signals through metal contacts, which is the concept of open/close circuit that we have learned in high school. The optical switch in the Razer Huntsman mechanical keyboard is different, connecting the signal via an illuminating laser that connects the transmit and receive positions, and the disconnection occurs when the light ray is blocked in the middle. According to the structure, the Razer Opto-mechanical switch will give a seamless ray of light when pressing the key down through the 1.5mm travel milestone, the switch’s translational axis will no longer obstruct the light rays, and when the spring pushes back up. At the original position, this translational axis will again disconnect the laser and disconnect the signal. The speed of light is of course too fast, the reception of the signal also makes it impossible to recognize the delay in perception.

We all know lasers are focused light, neatly operating space in each switch, so it will not be able to “jam” the signal when light is mixed with the neighboring switches. In addition, when removing many mechanical parts, the operation is somewhat simpler, less frictional, combined with a thrust spring of only 45g will give a very light and gliding feeling. Also, the weight of the Razer Huntsman mechanical keyboard is very light, is it partly from this reason? However, it doesn’t matter, but let’s pay attention to the fact that Razer claims the optical switch Opto-mechanical in Huntsman has a lifespan of up to 100 million clicks, which is twice the life of the traditional mechanical switch CherryMX.

Such confidence is not without reason, pay attention to details in each Razer Opto-mechanical switch that has a stabilizer that supports the keystrokes with a steady and steady push-down travel. sure. At the same time, the slider is a smooth surface glossy plastic to reduce friction with the switch cover (housing). Combining the balance bar details, glossy plastic slider, reduction structure of mechanical details, for a Razer Opto-mechanical operation smoothly and smoothly. Optical signal reception technology is also much more reliable than the mechanical contact of traditional circuits.

In terms of durability, according to the theory of combined mechanical optical switch such as Razer Opto-mechanical will last longer than total mechanics because it avoids corrosive friction. But using the fact that there are minor errors or not requires waiting more time to confirm, because the Razer Huntsman series mechanical keyboard with a completely new optical switch appeared not long on the market.

Overall, the Razer Huntsman Opto-mechanical keyboard gives an extremely uniform feeling of force and stability. The press positions that are not in the center like the four keycap edges all give the same force and appear extremely little until no friction between the slider and the housing is noticed. The space keys feel softer when pressing the two ends according to the habits of many users, thereby making them feel quite comfortable (for example, pressing Enter and Backspace with the right little finger is weaker than the other finger). However, please pay attention if we have a habit of pressing hard or a little excess force will be somewhat uncomfortable when the key hits the bottom. Although more or less, when you hit the bottom you will find the key a bit hissing.

The Keycap is still a translucent white plastic that allows light to penetrate, covered with UV velvet to make the material in contact with the user’s finger and to shape the character. This is a common keycap type that has been around for a long time, nothing new, just in the Razer Huntsman Opto-mechanical keyboard with a slightly thicker coating only.

People criticize the original keycap and want to replace the keycap? It’s easy because the slider of the Razer Opto-mechanical is the friendly cross-type with a large number of keycaps on the market. But there is an inherent drawback: The bottom row (in R1) has a “unique” key length, not in the majority of parcel keycaps, still the same as the long-featured Razer key layout. Users will be quite strenuous when searching for each suitable key.

RGB backlighting is still a proud strength in Razer mechanical keyboards that have been around for the last few years. The light on each switch gives bright and bright colors, gradients when installing Wave or gradation effects are very smooth, or static lights (1 color continuously) with no flicker or ” vibrate ”,. We can check it easily by using the phone to record the backlight effect at high frame rates such as 60 frames/s, 50 frames/s: Backlighting gives completely uniform light intensity.

where can you get a Razer Huntsman online