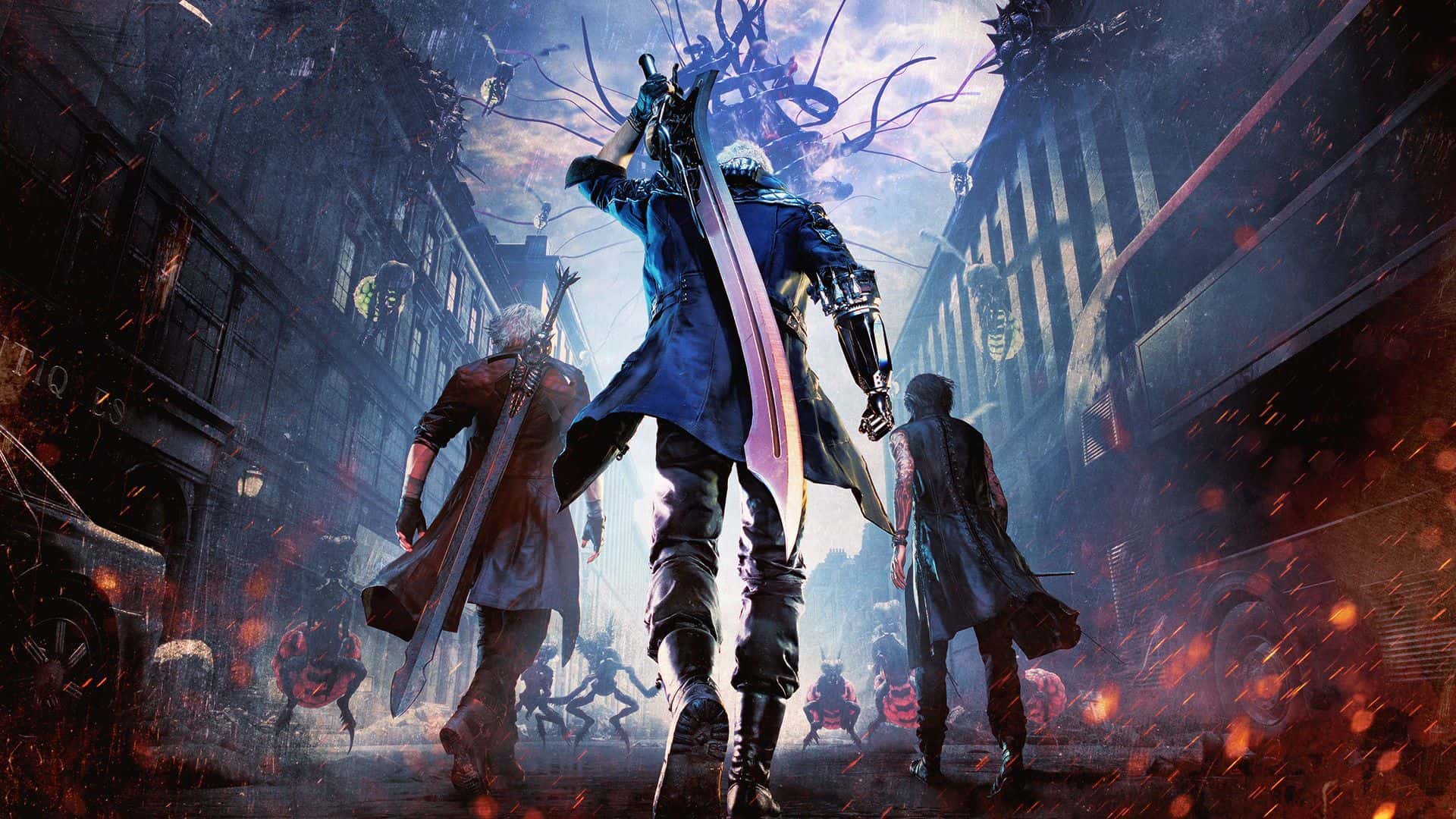 Devil May Cry is probably one of the special cases where the main character’s name overshadows the plot of the game itself. Indeed, anyone could not admire a young man with Sonic’s porcupine-looking black hair out of date, cursing ungrateful and blameless, rude, disrespectful to others ….

Try it again. Dante in Devil May Cry 4 can be described in a number of phrases: glamorous, graceful and certainly not too serious about everything – because there is a reason why an elite immortal demon hunter has a reason for worry? It can be seen that this is a natural character development from Devil May Cry 3, in which Dante is still described as a arrogant, irresponsible guy, and does not have a certain interest in others – But unlike DmC’s Donte: Devil May Cry, he doesn’t make players frown because of his unpleasant.

In Devil May Cry 5, something strange happened. For the first time in the game series, Dante is defeated in the very beginning of the game, and it says more than shows the power of the evil Urizen in the game. The demon hunter is now older, somewhat … humble than before, and left an emotional expression for the young. Nero now reflects clearly the character of Dante in his youth with the desire to express himself as much as possible, especially after the Devil Bringer / Yamato arm was taken away. Meanwhile, the new face V possesses meticulously written lines, citing William Blake’s poem as a hint of the extreme conflict between the original bloodlines. Also, pay attention to V’s attitude every time Nero is mentioned, maybe you will recognize V’s true identity before the game opens!

Devil May Cry 5’s story is “fan-service” heavy and doesn’t have many classes, but that’s probably enough. It is a long story but regulates the uniform pace by quite a lot of climaxes, and finally the ending once again makes the player feel excited. And so, our 18-year journey ends, there is no miraculous glory, but only broken pieces. Perhaps the only thing that makes this whole story so incomplete is that Trish and Lady seem to be just “passers-by”, leaving no imprint too deep as the main quartet.

“Easy to learn, hard to master” is always the main motto of Devil May Cry when it comes to the main gameplay, and Devil May Cry 5 is not an exception. The controls are as simple as ever: a melee attack button, a long-range weapon button, a jump button, a special button for each character like Devil Breaker for Nero, using Style for Dante and ending the enemy for V. But when combining them together, especially through the goal lock function that is the main focus of Devil May Cry fighting, they create Therefore, the technical complexes fight closely and rhythmically, asking for acquaintance in a short time to master.

Unlike DmC’s snatchy character movement, DmC’s lack of superficial lines and visual effects: Devil May Cry, Devil May Cry 5 brings the usual sense of fighting dress with every smooth swing each other, based on each moment the player continues or stops. This is reflected in the first moments with Nero, when the lack of his equipment is compensated for by a large amount of Red Queen’s swords useful in all situations, along with functionality. Exceed further separates “superhuman” and “new” players with the ability to “master” to burn the blade, increase damage to the next attack and even upgrade some specific blows.

However, that does not mean Nero has no new “toys”. Devil Breaker armaments created by Nico replace the former Devil Bringer arm that has more diverse uses, opening up new combat options if you know how to take advantage of them. Each Devil Breaker has two main functions and is activated in the same simple way: press the B button or hold the B button. For example, with Punch Line, you can fire this rocket as usual and it will continue to “disturb” a certain target, but if you hold the B button while it is flying, Nero will … jump on it and skate on air. Gerbara possesses up to four functions: inflicting damage on the enemy in front of him and repelling the enemy’s long-range attacks, pushing Nero into the air, firing a large beam of energy that deals “hurricane” damage, and Shoot a beam that bounces in the environment.

You can also detonate the Devil Breaker, creating a small explosion to escape the enemy encirclement during an emergency. If you get hit while using Breaker, you will not take damage but in exchange Breaker will be destroyed at that time. Of course this system is not really perfect: the Mega Buster acts like a regular gun, but you cannot lock the target and shoot like Blue Rose because the game automatically assigns the enemy drag function to the RB button combination. + B. In addition, not allowing the Devil Breaker to be transferred is a rather odd limit that writers think is not really necessary. But they are only minor limitations compared to the potential that Nero received in this period in Devil May Cry 5.

Dante’s versatile play style is still different from Devil May Cry 4. The four main Devil Arm weapons, four guns (if you really want to call a Red Orb gun a “gun”), four Style unlocks new attacks for each battle style, all of which can be Transfer between two LT, RT buttons and D-Pad cluster. A small change but important is that you can now choose the order of weapons and guns through the “set” of items, or even remove the toy you do not like to use.

The Devil Arm set blends old weapons with new moves, in which Balrog – the evolutionary version of Ifrit and Gilgamesh now has two modes: Kick Mode as the name of a set of closed combos and Blow Mode boosts mobility and allows quick moves. The King Cerberus squirrel can turn into a fire rod through the Swordmaster or an electric chain form by holding the Y button. Slowly, it is difficult to cancel the attack once Dante has struck, but has the ability to suppress the good crowd and disable the individual enemy for long periods of time.

V is the hidden card of Devil May Cry 5 when the series first receives a character that does not directly fight. Instead, he has the ability to summon three familiar creatures from the first version: Griffon, Shadow and Nightmare. Griffon acts as a ranged weapon, can drop energy thunder in many different ways. The Shadow is the key to dealing major damage with a continuous melee attack, while Nightmare lands as a missile whenever it activates Devil Trigger with good wide range of close-ups.

V controlling these three creatures is similar to the way Nero and Dante are played, except that you cannot control them directly, but must rely on the perspective and distance to the target. V’s evasion will cause the Griffon and Shadow to retreat (because they also have their own health bar), the enemy in a “near-death” state requires V to finish off directly, and he can restore the Devil himself. Trigger by … reading books. The way to play V is quite strange, it is easy to get level S or higher at low difficulty, but it starts to become difficult at Son of Sparda or more when the player has to carefully control up to three elements on the screen at once. This is a character whose writer does not feel like training for a long time, but the aftertaste he left in Devil May Cry 5 is not really small.

where can you get a Devil May Cry 5 online

There is a small tip that you should change the Griffon X button to another node, not on the ABXY node cluster, so that both commands can be ordered to attack the same button.

As usual, fighting takes up 90% of the time in Devil May Cry 5, and the development team at Capcom did a great job optimizing the player’s combat experience. In addition to the core of the main gameplay, previous versions do not lack the required climbing, jumping, and sometimes “puzzle” sections with really low levels of challenge, but are spread in an easy way annoyed by the player – the writer is sure that very few people want to see the Gyro Blade come back.

Devil May Cry 5 chooses a simpler, more linear game design, with no time-wasting segments of the player. In return, the opportunity to participate in combat is maximized, making the replay at high levels much more comfortable. If you want to challenge the skill beyond “swinging sword”, there are still secret challenges (Secret Mission), and the Blue Orb fragments are sometimes placed in a position that makes Sparda cry. Only one thing is not good enough is the context in the second half of the game inside the tree Qliphoth is slightly … poor in art, easy to make players feel bored.

Consistent with the tradition of the game series and similar to Capcom’s latest product Resident Evil 2, Devil May Cry 5 is worth playing again. Each game screen is not only an obstacle for you to experience until the end of the game, but they gather combat battles to challenge individual skills, as well as reflect the character’s power over time. Devil May Cry 5 is not really difficult, keeping level S or higher in combat is not difficult, fighting bosses is not difficult, but the difficulty here is to achieve combat techniques that you want to perform in every battle. It could be a one-on-one boss with just Royal Guard, or mastering the EX-Act skill while … mocking the enemy (Taunt) for example … With a diverse fighting mechanism that definitely cannot. Discover all in a single play like that, it’s really too much if you only decide to play the game and leave it.

Finally, the Devil May Cry 5’s enemy design is also a mix of old and new. Blood bats Pyrobat is simply another version of Blood-goyle but now explodes after measuring the earth, Death Scissor is similar to Sin Scissor stronger and has two new moves. New enemies all have the potential to damage a player’s S level, like Nobody – the monster that loves to let the eyes explode. However, there are two new types of enemies that most players will not be very interested in when they encounter: Fury – a monster that uses its claws to teleport instantly from eight sides and Hell Judecca, a “leader” capable of summoning demonic demons and also … teleports. Both of these enemies are not really difficult to deal with, but the nature of avoiding players constantly makes the writer realize how to handle them most easily is playing passively – a style that is not … fun at all. .

Boss, except Gilgamesh (not the set of gloves / legs Dante got from Echidna), the bosses in Devil May Cry 5 fulfill their duties – especially when most of them evolve from the entities that appeared in Devil May Cry 3. King Ceberus? It still released the ice, but this period enjoyed releasing electricity and fire, as well as changing the terrain of the area further. Caveliere Angelo had many appearances of the previous Credo battle, and it was undoubtedly the Royal Guard that was still refreshing to the point. The most unfortunate thing? We have no chance to handle Elder Geryon Knight in Dante’s role!

One thought on “Devil May Cry 5”