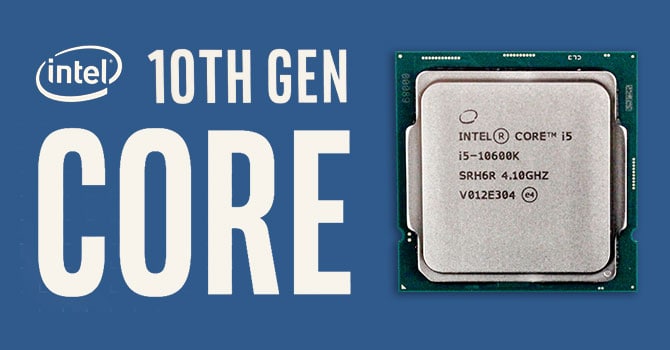 Following the tradition of the Core i5 series, the i5-10600K once again occupies the throne in mid-range gaming.

During the product launch last May, besides the Core i9-10900K which took up most of the tech sites, Intel also sent the i5-10600K to the media in the press kit. The fact that i5 CPUs are not as much noticed as i7 or later i9 is also evident because they are shaped for the mid-high-end personal computer market. However, not so that the appeal of this CPU line is inferior to the seniors. Even the i5-10600K can be considered as one of the most interesting CPUs of Intel’s dozens of Comet Lake-S 10th Gen Core i CPUs.

Continuing the tradition of the Core i5, i5-10600K CPUs aimed at users with moderate budget and knowing what they need. The difference between i5-10600K and i7-10700K is about 100 USD, a figure that many people can take advantage of to upgrade their graphics card, for a better gaming experience.

One of the points that makes Core i5 10 generation in general and i5-10600K in particular become much more attractive than the previous generation is the return of HyperThreading. Now, i5 CPUs will have a 6-core 12-thread configuration instead of 6-core 6-thread like the i5-9600K. As a result, this CPU’s multitasking performance has been greatly improved, ready to compete with rivals on the other side of the front line and even higher-end opponents thanks to its superior clock rate.

The above configuration is reused from the i9-10900K review so it looks a bit redundant, “overkill”.  The mainboard to pair with the i5-10600K will just be a mid-range Z490 with about 6-8 phase VRM, just enough for light overclocking. Additionally, I also rate the i5-10600K to be an ideal choice for SFF compact configurations using an ITX form motherboard.

With the HyperThreading equipped, with 12 threads, the rendering performance of the i5-10600K has been completely improved compared to its predecessor i5-9600K. Thus, in the typical test Cinebench R20, which is very popular for measuring single and multi-core performance as well as checking system stability, the single-core and multi-core scores of the i5-10600K are even better slightly more than the rival Ryzen 5 3600X.

Please note that while the scores are similar, Intel Core and AMD Ryzen 3000 have a fairly long technology gap, one side uses 14nm while the other uses 7nm. That is to say, despite being somewhat old, Intel’s technology is still enough to make its competitors wary.

Meanwhile, the i5-10600K’s Blender score gave surprising results when it was faster than the Ryzen 5 3600X when rendering the BMW file and slower in the Classroom file. In terms of pure performance through tests like CPU-Z, Geekbench, 3DMark, thanks to a higher clock speed than the competition, the i5-10600K easily scores higher, even outperformed up to 15%.

Thanks to a higher clock speed of about 0.4GHz in both single and multi-core boost clocks, the Core i5-10600K easily outperforms the competition in gaming performance when tested. Higher average FPS and 1% low than the competition will help ensure a smoother user experience. Not only that, in poorly optimized titles like PUBG, the average FPS of the i5-10600K is also even comparable to that of competitors in the upper range like the Ryzen 7 3700X. FPS is the most eloquent proof that even though the technology is up to 5 years old, Intel is still capable of making it difficult, even outperforming, in gaming compared to the competition. This is a big surprise, especially in the context that semiconductor technology still has annual leaps.

In terms of temperature, with only 6 processing cores, the temperature of the i5-10600K is handled very well. In the 10th generation Core I, laminating the silicon base while increasing the thickness of the IHS heatsink greatly helps in controlling the operating temperature. When operating with a standard clock in an air conditioner of 25 degrees C, the highest temperature of the i5-10600K has not yet reached 70 degrees C when it is cooled by 240mm AIO and TDP is only 89W. The TDP level when the CPU is at rest is only 36 degrees Celsius. Without the need for overclocking, the i5-10600K can be completely cooled by popular heatsinks or low profile types for compact cases SFF.

Also, thanks to the heat generated during operation are quite modest, users are still about 30 degrees Celsius to be able to easily overclock the i5-10600K. In this review, with the Intel Extreme Tuning Utility overclocking engine, the i5-10600K can easily hit 4.9 GHz all-core clock and temperatures are less than 80 degrees Celsius. At the same time, the TDP is only around 150W, slightly higher than the announced 125W rating. This gentle overclocking makes it easy for users to get about 10% more performance.

To sum up, the i5-10600K is arguably the most interesting CPU in Intel’s newly launched Comet Lake-S line of CPUs. Equipped with 6 cores 12 threads and high clock speed makes this CPU easy to touch the “sweet spot” of gaming configurations equipped with NVIDIA RTX 2070 or AMD Radeon RX 5700 XT and above. Not to mention, the very well-controlled operating temperature also makes the i5-10600K be used for compact ITX configurations. If you need building a configuration for gaming, the 10th generation Core i5 in general and i5-10600K in particular will be the most optimal choice on the market today, ready to race gaming performance with both the opponents on price range.