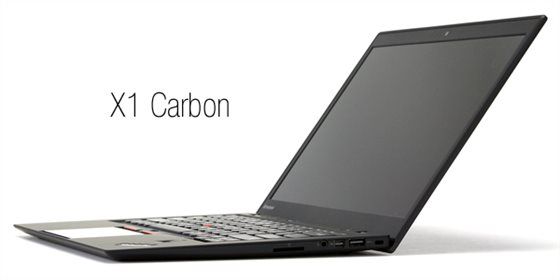 From the ThinkPad X1 Carbon Gen 6 box, the X1 Carbon ™ logo embodies the elegance of a distinctive red-and-black tone. The X1 logo stands out alongside the familiar ThinkPad logo. The box also shows the sophistication, meticulousness of the manufacturer with the lid extended to the side in the form of butterfly wings, high-grade paper. Accessories, user’s manuals, warranty documents are neatly placed, neatly arranged in separate small boxes with prominent red tones.

Basically, the ThinkPad X1 Carbon Gen 6 retains the familiar design of the Gen 5 generation with cutting edge, square lines. The screen or machine body is strongly cut to maximize the thinness and optimal size. With a three-ring measurement of 323.5 x 217.1 x 15.95 (mm) and a weight of 1.13 kg, the X1 Carbon Gen 6 is one of the thinnest, Easy to fit in the backpack, bag and convenient to move. Even when it is necessary to hold the device with one hand for long periods of time it is not difficult.

The casing continues to use magnesium alloy in the body and carbon fiber in the lid. Soft, velvety soft cushioning gives a smooth feel to the palms. The sturdy hinges provide an impressive, sturdy fit and allow the machine to be easily opened with one hand. X1 Carbon Gen 6 meets the military standard of durability that has made the ThinkPad brand ever.

The number of ports on the X1 Carbon is plentiful with an HDMI 1.4b port, a Mini-Ethernet port for connecting the RJ45 wire network via a removable cable, a combo headset and mic, and two USB ports. 1 Type-A, one of which is Always On, which supports charging for peripherals such as smartphones and smartphones even when the computer is turned off. Noteworthy when the machine is equipped with two USB 3.1 Gen 2 Type-C support Intel Thunderbolt 3 speeds up to 40Gbs, which allows charging, data transfer and DisplayPort output.

The X1 Carbon also uses the Type-C ports to charge the battery without adding a separate power port. Two Thunderbolt 3 ports are also available for use with the dedicated Dock, adding to the X1 Carbon range of connectivity options. In addition, the X1 Carbon Gen 6 is fully equipped with modern wireless connectivity such as Bluetooth 4.1, NFC, dual-band WiFi 867 Mbps, 4G LTE-A cat 9 (optional).

One point to note is that the slot machine SIM and microSD card on the back so if not aware that the user may not recognize the slot. You will need a sim card or sharp object like a toothpick to push the SIM slot out like on the phone. To use the 4G connection on the X1 Carbon Gen 6, users will have to trade in advance with the vendor to ensure the LTE module is installed. If you do not, try to install the SIM card, the machine will not receive.

The upgradeability of the X1 Carbon Gen 6 is quite limited as it can only replace the M.2-2280 SSD, WiFi module, battery or fan cooler. All other components including RAM are soldered onto the motherboard.

The ThinkPad X1 Carbon Gen 6 comes equipped with security features such as a fingerprint reader, infrared webcam, which supports Windows Hello to open. Face lock. In addition, the machine is dedicated security chip TPM 2.0 to be able to set the password for the BIOS, hard drive, password at boot. Noteworthy when the X1 Carbon Gen 6 also supports the FIDO 3-layer security standard, integrated straight into the fingerprint reader, allowing secure login to Google, Facebook, Dropbox, Paypal.

The fingerprint reader on the X1 Carbon is a fingerprint type for fast, accurate finger recognition, which can receive fingerprints at multiple angles. Face unlocking works well, sometimes it is faster and more convenient than the fingerprints due to the characteristics of the laptop rarely turn off the screen as the phone. Due to the infrared sensor so in the dark machine is unlocked by face very fast. Nevertheless, face-unlocking is still risky and may be overtaken by 2D images, so users should consider using them.

Like the Gen 5 generation, the X1 Carbon Gen 6 features a 14 “thin bezel, IPS panel, the resolution of which BiaReview’s experience reaches WQHD (2560 x 1440 pixels) equivalent to 2K. All content is smooth, detailed, showing up in the text or icon in Windows and more pronounced when surfing the web, watching 4K videos on YouTube.

One detail that can be difficult at 2K resolution on the X1 Carbon is that by default the DPI level in Windows 10 is set at 200% so some software can be over-sized, easily losing characters, not show all content. This can be overcome by transferring the DPI to 175%.

It also has a touch screen or HDR option, which is one of the first laptops in the world to support Dolby Vision HDR, with a maximum brightness of up to 500 nits that exceeds the 300 nits average of the model not HDR.

Most ThinkPad laptops can open up to 180 degrees and the X1 Carbon is no exception. This allows the camera to adjust the viewing angle flexibly and suitably used in many different situations.

The sound system on the machine is occupied by 2 speakers located on the bottom with a total capacity of 2W equipped with Dolby Audio Premium and Dolby Atmos technology for headphones. It is a professional machine for work, but the X1 Carbon is still good when listening to music or watching movies in large volume, in warmth, not shaken when the maximum. With video conferencing via Skype or Facebook Messenger, audio is specially optimized for voice, making the conversation clear.

ThinkPad laptops have traditionally been highly regarded for their good typing experience and reasonable keyboard layout. On the ThinkPad X1 Carbon, this continues to flourish. Keyboard of the machine for impressive journey, bounce rate, hand stick, fast typing is not attached to the letter. The keys are arranged properly, the flex phenomenon when the emphasis is minimized. Text on the sharp keys, beautiful fonts, large size, convenient operation.

Lenovo retains the layout of the Fn function key at the outset of the ThinkPad style so far, so if you are not familiar may be easier to type with the Ctrl key next. Fortunately, the manufacturer allows the positioning of these two keys in the pre-installed Lenovo Vantage software.

Backlit keyboard with 2 different brightness. Backlight is printed directly on each key, not just on the edge, giving high brightness, clarity, beautiful appearance, easy operation when working in the night or low light without turning on the table light.

The touchpad is made of large size, spacious, covered with glass, for high sensitivity, smooth, no hitting. The touchpad on the X1 Carbon supports the Microsoft Precision driver, allowing for much smoother, especially zooming, in Edge. If you only use office tasks, basic image editing, touchpad on the machine can completely replace the external mouse.

Of course, there is no shortage of specialized TrackPoint keys on ThinkPad laptops. TrackPoint will allow you to control your mouse without having to lift your finger from the base row. Home row (A to L keys with two F and J keys with small edges to position when typing 10 fingers), from which to raise Maximum performance and typing. However, in order to master the use of TrackPoint will need more time to practice.

With this configuration, the X1 Carbon delivers fast performance, responds immediately to heavy tasks such as the Firefox and Chrome web browsing around 20 tabs while opening up Photoshop, Lightroom to edit photos.

The temperature and noise of the X1 Carbon are not good. The machine runs quietly, but it is quite hot when it comes to heavy duty CPUs and GPUs running at 100% capacity. CPU temperatures can be as high as 90 degrees Celsius when running heavy tasks. Can feel the heat if the machine on the lap and when placed near the heat sink slot located on the right. In return, the cooling system can keep the machine running at high clock for a long time, so the performance of the X1 Carbon better than the ThinkPad L380 recently evaluated BiaReview using the same CPU Intel Core i7 – 8550U and 8GB of RAM.

If you feel uncomfortable with the Intel Core i7 – 8550U temperature range on the X1 Carbon, you can use the Intel XTU software to reduce the voltage of the CPU, which is cooler and more energy efficient does not affect performance.

About software, Lenovo does not install too many bloatware applications on the machine. Only the Lenovo Vantage app comes pre-installed with a sleek, modern interface that blends seamlessly with the Fluent Design theme on Windows 10. In addition to fine-tune keyboard and touchpad settings, Lenovo also manages the device. Monitor, battery, sound, network connection, such as automatically reduce the screen brightness when locking the camera or turn on the eye protection mode in the night … This application has the ability to check the error of the hardware, software, automatic driver updates, software system is quite useful.

Interestingly, the X1 Carbon Gen 6 also includes a virtual assistant, Amazon Alexa, that allows voice interaction to search, retrieve information or command, control features and software. The microphone itself on the X1 Carbon is also optimized, giving the ability to capture very well. Standing just 3.4 meters away, just say the normal volume is still able to command. However, Amazon Alexa’s voice is not as good as Cortana is available on Windows 10. Alexa’s interface is not as intuitive, friendly as Microsoft’s virtual assistant.

Another unique feature on the X1 Carbon is the Glance by Mirametrix that offers the ability to automatically detect faces, eyesight. By default, if you do not see the user’s face for 30 seconds, the software will automatically lock the computer for enhanced security. In addition, this application also allows to automatically move the cursor and the window of the software is running in the direction of view on the infrared camera, useful when connected to the external monitor.

On battery life, equipped with 57 Wh battery, the actual battery life of the X1 Carbon Gen 6 is quite good. With common tasks such as web browsing, text editing, lightweight photo editing, 70% brightness screen, set to Balance Better Performance mode in Windows 10, the machine can hold approximately 6 to 7 hours. continuous use. With the BiaReview’s standard viewing battery, 70% screen brightness, 70% audio volume, headphone jack, and a 720p HD video playback, with WiFi enabled, the X1 Carbon can stay up to 14 hours.

Unfortunately, despite the fast charging support, the charger comes with 45W (fast charger is 65W), so it takes a long time to fully charge the battery. It takes almost 2 hours and a half.

As the top-of-the-line ThinkPad, in the 6th generation, the X1 Carbon continues to showcase the features that make the laptop so powerful, as lightweight, compact, durable as the military standard. Finished products, meticulously worked up high-end luxury. The handset has many modern features, catching up with trends like 2K screen, thin bezel, face scanner webcam, fingerprint reader. Performance, battery life, keyboard quality, touchpad of the X1 Carbon keep the quality, the ThinkPad quality ever.

The only problem with the X1 Carbon is that the manufacturer has set a high TDP level for the CPU, although it delivers fast, stable performance but makes the machine hot and can be annoying in the process. .

The price of the X1 Carbon has always been picky, and this is exactly what the quintessential ThinkPad lineup is all about. If you want the best, the latest, the strongest in a laptop for work, you will need to pay the corresponding cost and certainly the X1 Carbon Gen 6 will be one of the options you should consider.