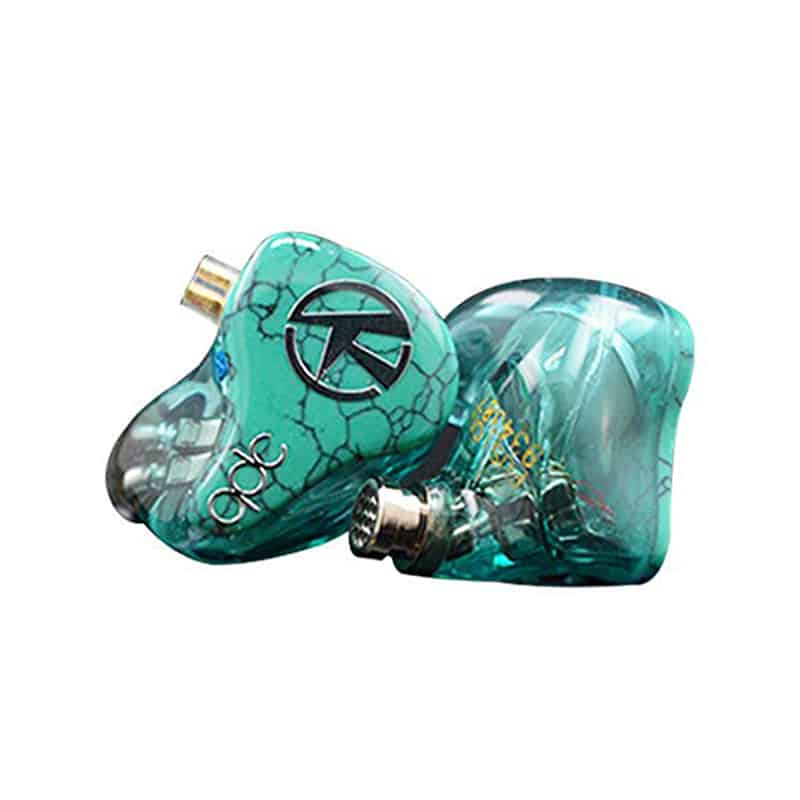 qdc is one of the few headphone producers that uses 3D printing technology to make the housing part. This means that the details on the headphones will be calculated and malnufactured with great precision.Thanks to that, the headphone cover will reach a high level of sophistication and absolute accuracy.

The faceplate is carefully closed and perfectly seamless with the main housing part, creating a smooth and almost unified headset. There were no bubbles or gaps in between the earphones.

You can see all the hardware inside the earphones because the housing part is made transparent. And when you pay close attention, all the wires inside the qdc Fusion are silver plated and arranged in a very scientific and orderly manner. Compared to many previous headphone companies, most of them featured a messy wire system that looked confusing and lacked aesthetics.

Each side of the headset is marked left and right with colored dots. Blue for the left and Red for the right. A simple but subtle detail.

Since the dynamic drivers needs air to work, they need to be ventilated. qdc used a bore design located at positions near the connector. They are covered with small crosses in meticulous detail.

The 2-pin connector on the qdc earphone is always made bulky, lying above the housing part. Still, other manufacturers would keep the connector in the body of the headset. Personally, I would prefer the connector to be more neat than this design. However, manufacturers have their reasons because they will have more space for drivers and optimize the sound chamber operation.

The pipe on the Universal version is made of stainless metal and has a very large metal mesh. This detail helps to increase the durability and the grip of the eartips as well as to ease the cleaning process.

The conductor that comes with qdc Fusion has excellent quality: silver-plated copper, consists of four cores twisted together. The cord feels solid but soft. The details of jacks, splits and junctions are made of metal and CNC machined. The connector and 2-pin connector are both gold plated.

It can be said that qdc’s products are thoroughly invested in appearance as well as finishing. Every detail, even the smallest, is thoroughly perfected and achieves the perfection of a masterpiece.

I used to be impressed by what the qdc flagship, the Anole VX, did. Therefore, when I had qdc Fusion in my hand, it made me even more excited. At first I thought that a hybrid headset should have a neutral sound rather than a V-shape. But the qdc Fusion is beyond everything I envisioned.

If you’re looking for a violent bass or even a thick, warm sound, congratulations, you can stop right now. Qdc Fusion has everything besides what I’ve just listed. The sound of qdc Fusion is characterized by its focus on detail and accuracy, mainly in the mid to high ranges. It reminds me of the Empire Ears Zeus XIV, hopefully you can imagine the overall sound quality of qdc Fusion.

Regarding the bass range, certainly the quality goes beyond the quantity. The bass volume of qdc Fusion is balanced, which helps the mid and high ranges to have more space. This also means that you won’t have a powerful bass band, causing the eardrum to flutter and pop when it reaches the subwoofers. That’s not the characteristics of qdc Fusion. Its bass range still has the necessary weight and thickness, but is not overwhelmingly plump and bulky. qdc Fusion gives the bass band a less prominent position in that area. However, the bass still has great accuracy and speed. Bass strip has a tight structure and has a flat response from sub-bass up to upper-bass. Marked neat, fast and flexible.

Apparently you can always use Equalizer to boost the bass range and qdc Fusion has a pretty good response to that. However I do not recommend using this method because in my opinion, interfering with the EQ always corrupt the intergrity of the originals.

The transition from the bass band to low-mid is made seamless. The low-mid section is not affected by the weight or thickness from the bass strip. qdc Fusion focuses primarily on performances in the rest of the mid range. You should feel a gentle, elegant performance.

The mid range is accurate and clear. You will not feel empty in this mid range like on the V-Shape negative ears. The instruments are naturally performed with high integrity. Some people will find it a bit underwhelming. The upper mid is more advanced, where the instruments and vocals at the high notes become elegant and soaring. This does not mean that the male voice performs poorly. qdc Fusion still presents the warmth needed in timbre. In terms of color in sound quality, qdc Fusion is once again a neutral headset. It is not really dry or wet, but it is at a safe range so that all the notes are not too colorful. To me, the whole mid range of the qdc Fusion is bright and without any fancy elements.

As I have stated above, qdc Fusion is a mid-range and slightly bright headset. However, this does not mean that its treble band is sharp or harsh. Qdc’s treble strip is finished with an unique quality: Crunchy cymbals, violines or high notes do not feel sharp or dazzling, clear sound, porous and no sibilant nodules appeared.

What the qdc Fusion does well is the stage space. It creates a vast 3D-like music space. Singers, musicians, all appear as a virtual stage before your eyes. Instruments are positioned in precise space with clear layers and details.

qdc Fusion is a rigorous tested headset, which shows the merits of the recording mercilessly. So be careful when your music is recorded with bad quality.

qdc set foot in the Hybrid headset market comparatively late but they stood out compared to similar products. It is unlike any hybrid headset I’ve ever heard before. It does not emphasize on the bass range, but focuses on the mid and treble bands. The sound and soundstage are excellent while the ability to separate the instruments is very impressive, and so is its finishing design.

If you’re looking for a headset with all of these elements, but at a reasonable price, I think qdc Fusion is definitely worth a consideration.

where can you get a qdc Fusion online