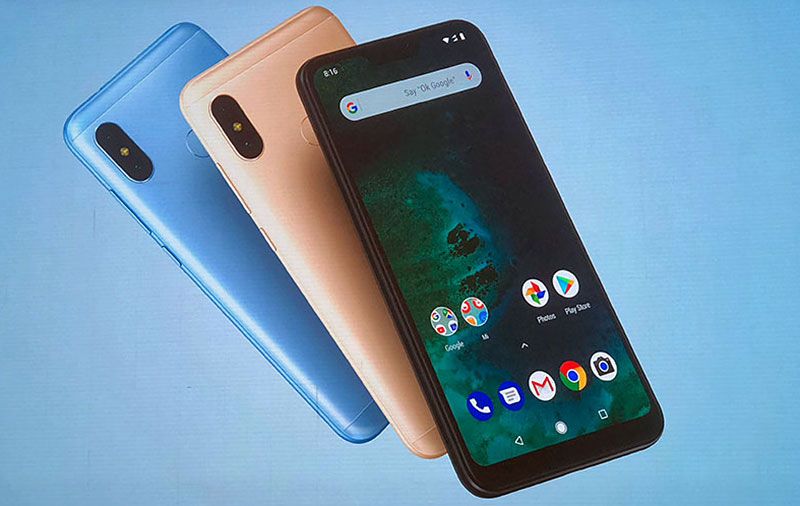 As stated Mi A2 is like a Mi 6X installed with other software, so the design of the two machines is also identical. The back is identical to the old A1 with metal frame and two antenna strips on both ends. This is also the basic design that many other Xiaomi smartphones have used.

The new addition to the Mi-A2 is a pair of dual-lens cameras mounted vertically, like the Apple iPhone X. Looking at the back, the camera cluster looks very prominent, but also makes the machine lacks balance. Anyway, this design looks better than the dual camera split flash and slightly out of the Mi A1.

The body is quite thin, curved so feel comfortable. However, because the case is made of metal, when the hands are dry, the machine feels slippery. Compared to previous generations, Xiaomi upgraded the screen to a standard 18: 9 screen size of 5.99 inches but narrowed the edges of the screen so that the display area was significantly larger but the body was no long.

Although the metal frame around the screen and components, but the screen clusters of Mi A2 is slightly more convex than the frame should feel uncomfortable when swiping from both sides. In addition, the company’s choice of cut off the 3.5 mm headphone port and MicroSD card slot is also a step backward compared to Mi A1.

The screen of the Mi A2 is 5.99 inches, 2160 x 1080 pixels resolution and IPS LCD panel. With a maximum brightness of only 400 nits, the Mi A2’s screen is a bit hard to see when used outdoors. The viewing angle of the wide screen, only when viewed from the bottom up slightly reddish.

In terms of display quality, the Mi A2’s screen has a slightly greenish-white balance, showing a slightly different color scheme. This leads to image editing on the screen that is prone to color misalignment if viewed on standard color display devices. Unfortunately, there is no option to adjust the color of the display just like other Xiaomi machines using the MIUI software.

On the sound quality, the loudspeaker of the Mi A2 is quite good enough to hear when the surrounding environment is not too noisy. Machine only mono speaker rather than dual speakers like last year should experience listening to music, watching movies not impressed.

Mi A2 still carries a dual camera system like the previous generation, but the hardware and setup have changed. There is no longer a telephoto camera like the A1, which uses two cameras with wide-angle focal lengths, with a resolution of 12MP + 20MP and a large aperture of f / 1.75. Front camera with 20MP resolution and f / 2.0 aperture. All three cameras of the Mi A2 now use the sensor of Sony.

The main function of the rear camera is to capture the depth of the image to support the capture of the font. In addition, Mi A2 also allows users to choose from 12MP camera or 20MP camera when shooting in Manual mode. Typically, the camera is only taken from the main camera 12MP, but when turned to Manual mode, you can choose from 12MP camera or 20MP camera. According to Xiaomi, the 20 megapixel camera with the feature called the Super Pixel will pair 4 pixels into a large 2 μm pixel for better light output than a 12 megapixel camera with 1.25 μm pixels. Maybe so, in the manual mode, Xiaomi calls the 20MP camera option a low-light lens, while the 12MP camera is a conventional lens.

With normal shooting mode, fast and accurate focusing is almost just a matter of raising the camera to the right focus, shooting speed and processing speed. However, when moving to portrait mode, the camera save image much slower.

In favorable light conditions, the Mi A2 produces high quality, detailed, high definition images, contrasting but slightly brighter. The sky or warm colors in the image are pushed up a little higher than the actual should glance.

With ambient light, the camera’s Mi A2 automatically activates the HDR feature to significantly improve the range of light in the image. HDR photos of the machine give a good impression, natural, wide bright range. Even with high brightness direct sunlight, Mi A2 still produces good quality images. Both the sun and the bright areas in the picture as the motorcycle is fully restored. When shooting HDR, Mi A2 retains high speed, no significant difference compared to normal shooting.

In low light conditions, the image of Mi A2 still retain good quality. The sharpness, detail in the image is fully reproduced, not being overcrowded or too smooth. Under some very poor conditions, the machine pushes the ISO level to 1600, so the image will be slightly distorted, but the white balance is guaranteed.

When the light is not favorable, the camera retains the focus and processing speed is quite fast, focusing only slower when the scene is dark, human eyes are difficult to see clearly. Also in manual mode, users can also switch the 20MP camera light that Xiaomi calls Low Light Lens.

In the ability to capture deleted images, even without a telephoto camera, it seems that when switching to the background blur mode, the camera of the Mi A2 will automatically zoom in a bit for a clear and natural font effect. It is not possible to select the level of clearing both before and after shooting. Fonts can not be resized.

The Mi-A2’s selfie camera has high resolution, high-speed shooting and flash-assisted flash. About the software, the machine has both features to delete the font and beauty automatically.

The normal selfie image from Mi A2 is good quality, high detail when shooting well enough. In low light conditions, the camera has enough flash to brighten the face, but the shooting speed and focus is slow enough to be shaken if the hands are not sure.

The feature I’m not happy with is the selfie delete font. Quality selfie delete fonts good enough to impress the photographer, but the speed is problematic. Each capture takes a long time, and during that time the camera application interface is slow, jerky.

Mi A2 is more powerful than the previous generation. SoC Qualcomm Snapdragon 660 has the power not inferior to the Snapdragon 8, much better than the Snapdragon 625 on Mi A1 and A2 Lite. 4GB of RAM is enough to meet the needs of multitasking, but 32GB of internal memory can be a little bit if users often take pictures, film or play more games. Do not have a memory card so if you use more you should buy a 64GB version.

Mi A2 smoothly performs common tasks. Software close to the original Android may also help the machine operate more lightly, less burden MIUI’s complex tasks. Configuration of the machine is enough to meet most games today with frame rates from 40 to 60 fps and high graphics settings, except for the optimized games such as PUBG Mobile.

In performance measurement applications, Mi A2 scores are comparable to more expensive smartphones with equivalent configurations, such as the Nokia 7 Plus or Oppo F7. With the GeekBench application, the machine scores much lower than the similar Snapdragon 660. We will continue to monitor further to find out the cause of this score.

Android One software is the biggest difference between Mi A2 and Mi 6X. All machines in Android One are supported by Google soon, so Mi A2 will be updated soon to Android Pie in the future. The native services in the machine are used by Google, but Xiaomi retains some of their applications such as Mi Drop (Wireless File Transfer) or Infrared Control on the machine.

However, when MIUI quit, Mi A2 also lacks many useful features of this release, such as Face Unlock (Mi 6X equipped with this feature), using two social accounts simultaneously ( Dual Apps, or Dual Space.

Besides, MIUI also has a rich theme store, allowing you to customize the phone faster. Of course some of MIUI’s features can be met by third-party software, but if it’s integrated into the phone’s native software, it’s more convenient. So, pure Android has good points, but not completely superior to MIUI.

where can you get a XIAOMI MI A2 online

Xiaomi’s midrange smartphones typically have a larger battery of 4000 mAh or higher, but the Mi A and Mi 5X series, the Mi 6X, only have about 3000 mAh. As with the Mi A1, such battery life is enough to ensure long battery life, because the Snapdragon 625 saves power, the Mi A2 uses a more powerful chip. Unfortunately, the improvement in performance has to do with the poorer battery life.

In practical use, I usually do not reach the use of a day, comfortable with Mi A2. With normal tasks such as surfing, social networking, taking photos and using 4G connection, WiFi, the machine only stood about 12 hours, the screen brightness is less than 4 hours.

This number is less than the writer’s experience when using the Nokia 7 Plus, also using Snapdragon 660 and original Android but bigger battery. Learn more with the AccuBattery tracking application, I found that the machine usually has a time to reach deep sleep status is very low for the day, only when the machine overnight, not using the new machine reached deep sleep

Thus, the time that the machine installed to pause the application, put the machine into a resting state is quite long, so if using the machine as it is during the day, the battery will spend quite fast.

With the Mi A2 version, Xiaomi has made significant improvements in performance and camera. Compared to the previous version, it can meet the demand for games and applications that require high performance. The camera does not feature the ability to capture the background with the telephoto focus, but is upgraded in terms of quality and ability to capture low light.

However, Mi A2 is not a complete upgrade of Mi A1. The biggest weakness of this phone is that the battery is not impressive, especially when compared to other Xiaomi machines. To get more impressive performance, users are forced to accept the battery of the Mi A2 is much worse than the first generation, and the machine also no longer plug the earphone or memory card slot.