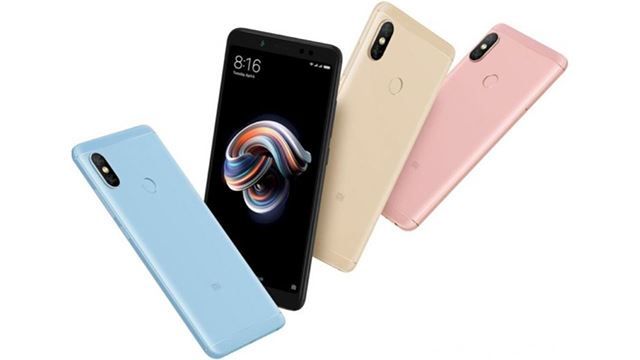 Redmi Note 5 has officially entered the screen 18: 9 screen. On the front, the machine has a significantly thinner screen compared to the old but not as thin as the screen of the Mi Mix 2S. The phone’s screen / frame ratio is 77.4% compared to Redmi Note 4’s 72.7% and Mi Mix 2S’s 82%.

The details on the front side include a self-contained camera, speaker phone, two light sensors and a larger proximity sensor, probably to match the design of the front camera and an LED. And the bottom part does not have buttons at all, looking a bit space similar to the Nokia 7 Plus. Basic navigation keys (multitasking, home and back) are hidden in the screen, allowing you to switch to gestures like iPhone X.

The back looks very familiar with the beveled metal body, the plastic upper and lower end for wireless transmission along with the circular fingerprint sensor in the middle of the back. It can be said that if the cover camera dual, the back of the Redmi Note 5 is the same with the other Xiaomi phones. However, the handle feels the back surface is treated rough and grip hand than the older generation. The color of the two plastic parts also match the color of the metal body.

On the edges, everything is the same with other Xiaomi phones: there is an infrared sensor next to the port (micro USB) and familiar keys. Volume key and power key are set to buoyancy and bounce. Unfortunately, Xiaomi uses the same memory card slot as a SIM card slot. So, if you use two SIM cards, you will not be able to plug in a memory card again. The handset will continue to use Micro USB ports, not Type C, to transfer data and charge it with the old Quick Charge 2.0 (5V / 2A), although the Snapdragon 636 itself uses Quick Charge 4.0.

Overall, Redmi Note 5 still carries the familiar design of Xiaomi, but is updated with a 18: 9 screen, which is thinner than its predecessor. The quality of finishing on the back has little change in hand grip and the color between the plastic / metal match. The machine is also significantly heavier than the Redm Note 4 (181g – 165g) and longer should use one hand will be more difficult to the upper half.

Redmi Note 5 has a 5.99-inch screen, 18: 9 aspect ratio, IPS LCD resolution of Full-HD + with pixel density of 403 PPI. The screen parameters are the same as the screen of the recent Redmi 5 Plus.

In actual experience, the display of the two machines have similar display quality. In default mode, colors are reproduced fairly well, with deep black and good contrast, high brightness at high level, wide viewing angles. The ability to look outdoors is temporary enough to clearly see the content on the screen if it is not too bright.

Similar to other Xiaomi phones, the Redmi Note 5’s screen is equipped with a variety of color options (warm, standard or cold) and contrast (auto, contrast or standard). By default, the camera uses standard color mode and the contrast automatically adjusts to ambient light. You can select the “increase contrast” mode if you want the colors to be more flattering, while the “standard” mode will have more standard colors but the animation is much less.

Redmi Note 5 is Xiaomi’s first smartphone to use the new SoC Snapdragon 636 processor. This is a good performance chip with eight CPU cores, including four high-performance 1.8GHz Cortex-A73 and four cores. Cortex-A53 power savings of 1.6Ghz. In the field of telephony, the Cortex-A73 is arguably the most cost-effective mobile core currently available on the market.

In addition to the CPU, the Snapdragon 636 also features Adreno 509 graphics processing unit (GPU), LDDRAM4 memory and X12 LTE (modem) modem with up to 600 Mbps download speed. The SoC is still based on a 14nm production process similar to the Snapdragon 625.

However, in the experience, it is quite unexpected that the performance of Redmi Note 5 is not as impressive as the benchmark numbers. The gestures used in the application, such as exit the application, come back … often have a certain delay, especially if the game escape from the gesture is paused for a moment. Other activities such as opening applications, taking pictures, processing photos … are smoother but sometimes still lag.

The gaming experience of the machine is also not stable. In the two heavyweights I used to evaluate performance is Dead Trigger 2 and Warhammer 40,000: Freeblade, the Dead Trigger 2 processor is quite good, reaching a stable frame rate of nearly 50 fps, smooth playback and no frame reduction. Many times when “monster”. But with the Warhammer game, the machine only reached the frame level beyond 30 fps, when playing the feel of shock in the scene has many objects to handle.

where can you get a Xiao Redmi Note 5 online

On the battery, the Redmi Note 5 has a capacity of 4,000 mAh, less than 100 mAh compared to the 4100 mAh battery of Redmi Note 4. Although slightly reduced compared to the old generation, but such battery life is still quite large compared to Other mid-range smartphones are typically only at 3000 – 3500 mAh.

According to AccuBattery software, for more than a week of use, Redmi Note 5 has an onscreen, well-screened, and screen-off mode. Specifically, the machine stood 8h43 minutes onscreen during each charge (on average every hour onscreen off 11.5%), nearly 40 hours in mixed-use mode and about 0.9% of the battery in standby.

The drawback of the battery is that it does not have a fast charge, so the charging time is long. The full charge time of the Redmi Note 5 is about 2 hours 15 minutes, of which the first 30 minutes only charge about 30% of the battery.

Redmi Note 5 uses a dual camera system, a 12 megapixel camera (Samsung’s large 1.4-megapixel sensor, f / 1.9 lens and dual-focus camera) and a 5MP telephoto camera (f / 2.2 , pixel size 1.12μm). This is the first phone of the Redmi Note line with dual cameras behind. On the front, the self-sharp camera has a resolution of 13MP.

Redmi Note has long been one of Xiaomi’s most sought-after products at low prices thanks to its rugged design, a large screen, a strong configuration compared to the price and a battery longtime. On the new Redmi Note 5, these features continue to be inherited and improved. The machine still has a metal body, a large 6 inch screen with 18: 9 aspect ratio, configuration is also upgraded, battery life is good and the price is still very “Xiaomi”.

The highlight of the new generation Redmi Note is that the front and back camera are pretty good quality, even when shooting poorly. It can be said that Redmi Note 5 has resolved Xiaomi’s traditional weakness on low-end machines that is “camera not appreciated.” However, one point Xiaomi needs to improve right in this product is software updates to create stability and optimize the performance of the machine. In addition, the design should also change to be new, especially the back side.