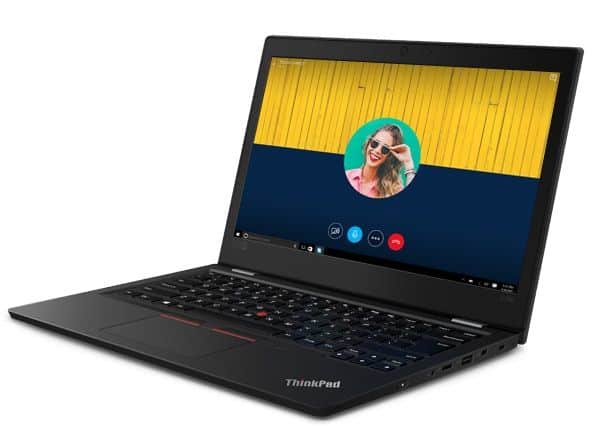 In the popular segment, Lenovo now has two laptops for users, the ThinkPad E and the ThinkPad L. While the E series is designed for small and medium-sized companies, the L series is for large audiences. more like schools and businesses and corporations. Normally, the ThinkPad L series is always divided into two models with 14-inch or 15.6-inch screens, but since last year Lenovo has added the 13.3-inch option to this laptop. Last year, the Lenovo ThinkPad L380 replaced the Lenovo ThinkPad 13 series, and this year the ThinkPad L390 acted as a slightly upgraded version of the configuration, as it was one of the first ThinkPads to feature the Whiskey processor line Lake of Intel.

The design is too familiar

The ThinkPad L390 basically retains the design of the older L380 that BiaReview has evaluated, so the writer will not go too deep into this section. We still have a laptop with a strong, square and masculine appearance. The review version of BiaReview has a matte black color covered with traditional soft touch, fingerprints and is not easy to clean completely. In addition, the machine also has a silver-gray option for those who like the novelty.

The ThinkPad L390 weighs 1.46kg and is 18.8mm thick, identical to the L380. Although these figures are slightly higher than the common level of thin and light laptops with the same screen size, Lenovo products still ensure the portability, holding with one hand comfortable and neat enough to carry far work without causing cumbersome, entangled. The subtle beveled edges also help the device look slimmer and more elegant.

The number of ports on the ThinkPad L390 is still plentiful, with two USB 3.1 Gen 1 Type A ports (one Always On-type port that supports peripheral devices even when the device is turned off), 1 HDMI 1.4 port, ear jack 3.5mm. However, the most notable are still two USB 3.1 Gen 1 Type-C ports, they also work as a charger (you can charge any charger) and both support DisplayPort standard audio and video output, data and power transfer according to Power Delivery standards.

“Generous” is so, but I thinks that Lenovo absolutely can increase the number of ports on the ThinkPad L390 even more. For example, the device still uses the standard mini RJ-45 network port, which is not very popular in East Asian, nor has the supplied adapter adapter that users have to buy outside for nearly $15. Besides, the memory card reader on the L390 only supports the popular microSD card on smartphones that only need to be connected to USB to be able to extract images, not supporting SD cards used in the camera. However, the L390 has an upgrade compared to the older L380 when equipped with one-touch fingerprint sensor unlocked through Windows Hello to help increase data security capabilities.

The L390 inherits the right-hand side power button position, the “pen” slot (as mentioned, the ThinkPad L390 has a Yoga version with a rotating touch screen with a Wacom pen) even without a pen or a screen. Touch screen, from senior L380. Maybe Lenovo did so to facilitate production and somewhat cost-saving.

The hinge of the ThinkPad L390 is not “as genuine” as the higher-end ThinkBook 13s but still feels solid and durable. You can still tilt the screen at a 180-degree angle to adjust the viewing angle or display the content displayed to the opposite person, but the cover and body will not be flat with each other.

Due to the energy-saving Core i5-8265U chip and no discrete graphics card, the ThinkPad L390’s heat sink is only moderate in size. Details of the heat dissipation of the device will be mentioned in the lower section of the article.

Overall, the design of the L390 is exactly what you would expect in a ThinkPad laptop. Square, certainly, somewhat masculine are the words we can use to describe the ThinkPad L390.

The screen is suitable for entertainment and office needs

The trend of thin bezels is becoming popular in the electronics market, not only laptops but also smartphones, TVs. However, Lenovo still resolutely retains the traditional thick screen border, making the product somewhat slower than the trend.

In terms of display quality, the Full HD 1080p resolution on the L390’s 13.3-inch screen produces sharp images thanks to its high pixel density, IPS panel for wide viewing angles, and good contrast. The color of the screen is neutral, good for movies and office use. The maximum brightness of the L390 is not too high, but thanks to the anti-glare coating, it can still be seen clearly when used outdoors, unless exposed to strong light.

The keyboard of a ThinkPad laptop has always been appreciated for its good typing, high bounce, deep key travel and the L390 is no exception. Due to the size of only 13.3 inches, the L390 does not have numpad keys, if the work often requires input, you should consider choosing the L590 version with a 15.6-inch screen size. In return, the keys are large, airy, limiting typing to those with big hands.

The only point that I “criticized” on the keyboard of the L390 is that the placement of the Fn (Function) button. ThinkPad models, including the L390, place the Fn button at the leftmost position, the bottom row, while with the exception of the Macbook, it’s the position of the Ctrl (Control) key, even on Lenovo’s own ThinkBook 13s. Therefore, you will easily press the wrong when performing tasks that use a lot of Ctrl key, especially gaming. You can remap the two keys via a few steps in the BIOS, but these are still unnecessary troubles, not to mention the difference between the two keys. However, it must be said that the L390 is not a laptop aimed at gaming needs, so this minus point may affect very few users.

Backlit keyboard with 2 different brightness levels. Backlight is printed directly on each key, not just in the border, so it is bright, clear, beautiful, easy to operate when working in the night or in low light conditions without turning on the desk lamp.

Referring to ThinkPad, you can not ignore Lenovo “special” TrackPoint key. With a striking red color, TrackPoint allows you to control the mouse without having to lift your finger from the base row of keys (ASDF …) to enhance working efficiency and typing. However, to be able to master the use of TrackPoint is not a soon.

The L390’s touchpad is large, spacious, and supports Windows Precision, allowing for smooth multi-touch operations. Above the touchpad is a set of three ClickPad keys similar to the left, right mouse and mouse scroll wheel (you can assign a middle-click button in the Lenovo Vantage software). Lenovo places these three buttons above the touchpad to make it easier to operate with TrackPoint, so you don’t even need a mouse.

Still the security features that make up the brand

Many people tend to choose ThinkPad laptops because of their security capabilities, especially for business users. Compared to its predecessor, the L380, the L390 has a very valuable addition, an authentic one-touch fingerprint sensor via Windows Hello, which enhances data protection. In addition, the L390 still has security utilities such as the dTPM 2.0 chip that encrypts and stores user information on the machine instead of the cloud system, or the Lenovo Vantage software provides a set of hardware analysis tools to soon broadcast show errors, personalize hardware settings, and automatically install important updates.

The L390 has a webcam but does not have ThinkShutter built in to cover the webcam when not in use as some of its recent products.

where can you get a LENOVO THINKPAD L390 online

The version of BiaReview has a mid-level configuration, with Intel Core i5-8265U Whiskey Lake chip, 4GB of DDR4 RAM, 256GB SSD M.2 SATA. It doesn’t have a discrete GPU option, so we can only rely on the HD620 integrated graphics core.

Typically, Intel’s ULV (Ultra Low Voltage) processors have a TDP (thermal capacity) of 15W, but manufacturers can still customize TDP if they need it. In the case of the L390, Lenovo has increased the power consumption limit to 25W, which is higher than the i5-8250U’s 15W on the L380. This – combined with the higher Turbo impulse of I5-8265U – promises to help L390 have better performance than its elder.

To evaluate the performance of the L390, I use popular tools like Cinebench, GeekBench for CPU, PC Mark 10 to measure overall performance through common tasks and 3D Mark Sky Diver for GPU.

HD620 integrated graphics cores are familiar to Intel laptop users, who have been around for years. With light titles like League of Legends, the L390 also only “pulled” 60fps when reducing the graphics setting to a minimum. The situation is even worse with Counter Strike: Global Offensive, when fps is only around 30-35.

With performance that’s not the highlight, the L390 is probably suitable for casual needs like surfing the web, watching movie entertainment or light office tasks.

The operating temperature and noise level of the L390 is within an acceptable range. Machine running smoothly but still hear the sound when operating at 100% capacity, and can feel the heat if the machine on the lap. TDP 25W for better performance but also more heat, while the heat sink on the machine can only run at high frequencies for a short time, before being “squeezed” to ensure safety. When running CineBench, only two cores are operating at high clock speeds (from 2GHz or more), the rest only works at 0.5GHz to keep the temperature at about 80 degrees.

L390 has the same 3 cells 45 Whr of elder L380. With light tasks such as web browsing and word processing, the device can last about 5 hours. Watch a John Wick movie on Netflix with 1 hour and 35 minutes at 75% brightness, the L390 consumes 23% of the battery, which is generally just enough.

The 45W charger comes with a compact size, convenient to carry. Fast charging speed, 1 hour is 70% but partly because the L390 battery has a not really large capacity.

If the ThinkPad L380 is an iPhone, then the L390 is the S version of that iPhone – keeping the same design, improving performance. That means that the L390 has all the strong points of its seniors: rugged appearance, ruggedness, rich connectivity ports, keyboards for a good experience and all the points that need to be overcome and improved: design Thick bezels and cooling are not efficient enough to maintain performance.

If that’s something you’re willing to tradeoff, the ThinkPad L390 is a great choice for office or school environments: high security, meeting the need for compact, portable.