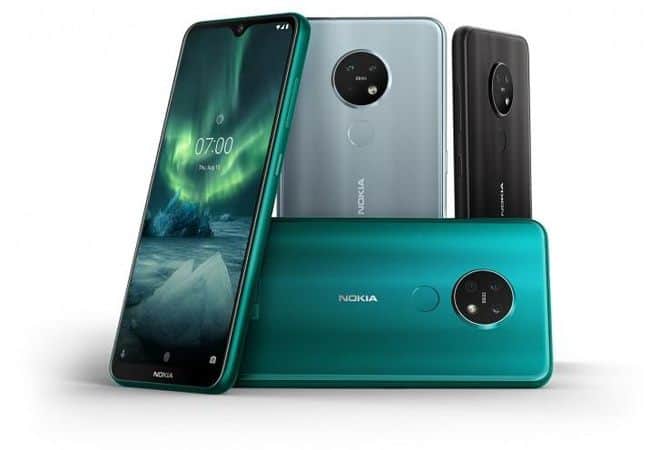 Design still has Nokia’s own style

Before, now still, Nokia products are always designed with minimalistic and sophisticated criteria. That is probably also the reason why this brand is so popular with consumers. However, the trend of the back of the gradient color effect has covered nearly the entire smartphone market, from high-end to mid-range, cheap. Nokia knows it needs to be aware of these trends, but at the same time still has its own style.

The back of the Nokia 7.2 is protected by Gorilla Glass 3, but instead of being transparent to show off the gradation effect when changing the viewing angle, the glass is dimmed so you just barely see the effects subtly. Feeling when touching the back of the Nokia 7.2 is very happy, it is like a new breeze compared to many other smartphones I’ve ever experienced. The situation of perspiration, fingerprints is reduced to a minimum.

The most prominent feature on the back of Nokia 7.2, nothing else is the cluster of three cameras “large”. It reminds me of Nokia’s “camera-phones” like Lumia 1020 and Lumia 1050. The trend of thin and light phones has forced manufacturers to design a convex camera assembly to be able to “add” more hardware and features, but the convexity of the camera cluster on Nokia 7.2 has been raised to a “range new high “.

This cluster of three cameras includes a 48MP main camera, an f / 1.8 aperture of ISOCELL GM1 sensor from Samsung, an ultra-wide-angle 8MP camera, f / 2.2 aperture and a 5MP depth-of-field camera. Of course, the Nokia 7.2 uses a proprietary Zeiss lens, and the LED flash is always inserted into the camera assembly to balance it. You don’t have to worry about scratching the camera due to this protrusion, because the camera assembly is also protected with Gorilla Glass 3 and surrounds them with a metal bezel to limit contact when you put the camera on flat background.

If the back of Nokia 7.2 makes me excited, the front of the device makes me feel a bit “down”. The design of the “water drop” screen of Nokia 7.2 is clearly an upgrade compared to the “notch” of Nokia 7.1 or Nokia 7 Plus, but it has become boring when even the low-end devices carry the design this plan. While Nokia’s direct rivals in the price range are shifting to full-screen displays, without the Nokia logo appearing on the bottom edge of the device, you probably won’t be able to distinguish Nokia 7.2 from other devices.

An interesting feature of Nokia 7.2 is that it is equipped with a dedicated physical key to call Google Assistant from any screen. If you have multiple smart devices installed through your Google Assistant, this physical key will prove very useful. However, the downside of this key is that it’s easy to mistakenly press – because it is symmetrical with the power button on the other side – and currently you cannot assign another function to this key without the need to use Google Assistant.

To save the area of ​​the water drop, Nokia 7.2 has a nice way to replace the notification LED is to integrate it into the power key. When a new notification or charger plugs in, this light will light up, and placing the power button position like this will help you somewhat reduce your attention to the phone.

The Nokia 7.2 still has a 3.5mm headphone jack, but it is placed on the top edge of the device, a position that is not really optimal, while the bottom edge has only a comfortable mic, single speaker strip and USB Type-C connector. Compared to the elder Nokia 7.1, Nokia 7.2 has also been “slightly upgraded” in terms of sim slot, supports 2 nano sims and 1 microSD card up to 512GB separately compared to 1 nano sim and 1 hybrid slot (sim or memory card).

Overall, the matte back and the large camera cluster are the most prominent highlights of the design of Nokia 7.2. They bring certain unique things, and that’s how you stand out among a bunch of other “similar” smartphones.

Bright HDR display in the segment

Nokia is a rare brand with HDR screens for mid-range smartphones at the moment, and Nokia 7.2 still inherits that advantage. Combined with Nokia’s PureDisplay technology, the color range and color accuracy of the screen will be better expressed, and Nokia 7.2 also has the ability to upgrade SDR content to HDR due to the dedicated image processor.

In practical use, the 6.3-inch IPS LCD screen of Full HD + resolution of Nokia 7.2 provides a good entertainment experience with wide color contrast range, vivid and realistic colors, especially the brightness and clarity are better. Machines of the same price range. The image processor automatically updates SDR content to HDR, so you don’t need to do anything. The YouTube or Netflix app does not display HDR content, but you can still see the difference, especially if you have another device nearby.

The brightness of the screen in fact is also very good, according to the manufacturer, the Nokia 7.2 panel can reach a maximum of 500 nits, good for outdoor use.

The chip is a bit old, the original Android software is clean and smooth

Nokia 7.2 is equipped with Snapdragon 660 chip, along with 4GB of RAM and 64GB of internal memory. This is obviously not the most powerful mid-range chip today, Nokia 7.2 will certainly be more attractive in the segment if it owns another more powerful chip. However, the Snapdragon 660 can still handle most tasks, except for heavy gaming, you will have to reduce the graphics settings a bit.

Although the configuration is similar to Nokia 7 Plus that BiaReview has evaluated, Nokia 7.2 still has a 20% better performance in the AnTuTu Benchmark application to measure overall performance. This result is most likely due to a software difference, when the Nokia 7 Plus at the time of the review was still running Android 8 Oreo. As GeekBench 5 changes the scoring method, we will only use two measuring tools, AnTuTu Benchmark and GFX Bench.

With the familiar games of BiaReview, Nokia 7.2 still responds well at the highest graphical setting possible, though the games are still getting heavier.

As for software, Nokia 7.2 comes pre-installed with Android 9 Pie. As part of the Android One program like many older Nokia devices, the software of Nokia 7.2 is very “pure”, does not contain any junk applications but only built-in Google applications (GMS) such as Maps or Youtube. In addition, Nokia 7.2 is also committed to updating software for up to 2 years, and we all know Nokia is the fastest update Android brand on the market today (of course, not counting Google).

The software has been optimized, so even though it only equipped with Snapdragon 660 chip and 4GB RAM, Nokia 7.2 still brings a smooth feeling, fast application opening speed, and good multitasking. However, at present Nokia 7 does not yet have a Dark Mode. This feature will be available on Android 10.

The 3,500 mAh battery of Nokia 7.2 is hard to impress. 4,000 mAh has almost become a new standard in the smartphone industry, Apple’s iPhone famous for its ability to optimize battery life has also come very close to this level (iPhone 11 Pro Max).

In the familiar battery life test, Nokia 7.2 significantly loses compared to other products in the same segment. The actual usage time of the device is not impressive, usually when I get home after a day of work, I will have to plug in the charger.

Another disadvantage of Nokia 7.2 is that it does not support fast charging. Using the charger that came with the device, there is currently fast charging, but the maximum output is only 10W. I tried changing to Oppo Quick Charge 3.0 and VOOC 3.0, the device is currently charging fast, but the time for fully charging the battery is still almost equal, namely 2 hours 25 minutes from 10%.

where can you get a NOKIA 7.2 online

I have high expectations for the Nokia 7.2 camera. A little bigger is okay, a bit more convex, but more important is still the quality of photos. The camera specifications of the Nokia 7.2 are not bad at all, and they also have a good assistant, the famous Zeiss lens. However, when it comes to practical experience, I understand why big names like Google and Apple have poured more resources into developing software processing features on the camera.

First of all about the imaging software of Nokia 7.2. Usually this is not something I will mention much, but Nokia 7.2 will be a “special exception”. Not only does the translation error remain “incomprehensible”, as difficult as previous generations (Portrait translates into portrait mode, professional mode only abbreviated to CN, …), the part features Nokia 7.2 software is also significantly limited.

Initially, the Nokia 7.2’s imaging application could not turn off the HDR feature automatically, nor did it have a fast and wide-angle camera toggle button. The speed of taking and saving photos is also very long due to HDR processing. After finding out and clearing the cache data of the camera application, Nokia 7.2’s capture interface was “normal” again. However, this should not have happened in the first place, and that is still part of Nokia’s fault.

When switching to ultra-wide angle camera, the image quality is significantly reduced, both in color, contrast and detail. This is understandable, the specifications of the wide-angle camera obviously can not “match” with the main camera, but the decline of Nokia 7.2 is markedly more noticeable than other smartphones with wide-angle camera.

Like every other smartphone, when it was dark, the weakness of Nokia 7.2 also began to reveal. The ability to compensate for the camera is quite impressive, but the noise reduction algorithm has a strong hand sometimes makes the image battered, lost detail. It also has a Night Mode to improve the image, as the two images in Night Mode have captured more details near the light source.

Nokia says this mode can identify users using tri-pods to increase exposure time, but really, how many people use tri-pods for phones, let alone a product? midrange products like Nokia 7.2.

The selfie camera of Nokia 7.2 has a 20MP resolution, f / 2.0 aperture, also uses Zeiss lenses. Photographs of this camera in most cases have good results, colors are a bit darker than reality and seem to be automatically beautified slightly. In low-light conditions, the skin tends to be overly smooth, causes unnaturalness, and occasionally appears to have the wrong focus situation (BiaReview always lets the machine recognize the face when shooting).

The quality of photos taken with Nokia 7.2 fonts has not been as expected. The background is smooth and has many lighting effects to choose from such as hearts, stars, smooth Zeiss, etc. (like Samsung’s Art Bokeh) but sometimes the subject’s focus is wrong even in well-lit conditions, and self-defeating images are still unnatural because of the gradual brightening and coloration. Nokia obviously has a lot of work to do if it wants to attract young users.

Like many other Nokia devices, the Nokia 7.2 also has a mode to shoot with both front and rear cameras at the same time called “Bothie”, but its practicality for everyday users is still a question mark.

In addition, a “special” feature on Nokia smartphones that can live stream directly to Facebook, YouTube with 720p high quality is no longer available on Nokia 7.2.

Like any other phone, Nokia 7.2 has its own strengths and weaknesses. Unique back design, exquisite, clean, smooth Android software, updated early on the new operating system are the advantages that rare brands other than Nokia now have.

However, the smartphone camera race is getting hotter day by day, and when the hardware is equal, manufacturers have to find a way to get ahead with software.

Update: We have added some information about the charging speed of Nokia 7.2, as well as the camera of the machine does not show full functionality.