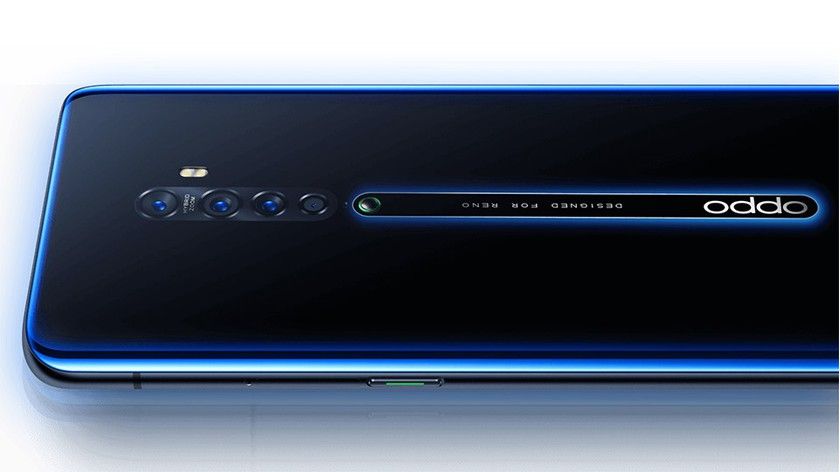 The design inherits the previous generation, with few minor tweaks

It is often said not to repair anything that is still good. This is exactly how Oppo approaches Reno2. The product has the same design as its predecessor Reno. Although the reputation is “old” but until now Reno is still a smartphone with high-end design with aluminum frame on both sides of the glass and the style has its own distinctive and eye-catching design.

The front of the Reno2 is a borderless screen, thin on all four sides due to the front camera cluster that is inserted into the “shark fin” hidden in the camera body, which hangs up and down when used. The display / front ratio of the device reaches 88%, equivalent to Samsung’s high-end Galaxy S10 and is a bit thinner than the old Reno (nearly 87%). The screen is protected by Gorilla Glass 6 and is also available with screen protector. The in-display fingerprint sensor continues to appear with fast and accurate recognition speed, approaching the traditional capacitive fingerprint sensor.

Like the previous generation, the “shark fin” of Reno2 indented fast in about 1 second and works smoothly. The manufacturer also takes into account the possibility of falling, so the “shark fin” camera cluster will automatically retract when it detects that the device is falling or when force is applied. Oppo also promises the indent mechanism can work at least 200,000 times in internal endurance tests, equivalent to five years of use at a “poking-out” intensity 100 times a day, higher than the actual use.

On the back of the phone is a curved glass panel with a design similar to the original Reno, which fits and holds your hand. The best design in this product is that the glass is seamless, flat and there are no details protruding. Cluster of 4 rear cameras is designed flat, not protruding like other phones. Oppo continues to put on the back a small protrusion in the middle of the camera cluster to limit scratches and dirt on the lenses.

New in the back design of the Reno2 compared to the old generation is that there is a glowing strip that looks like an LED light, which helps to pay more attention when looking at the back of the product. However, the blue version of this phone has a glossy surface, easier to stick with fingerprints than the rough surface on the old model.

The power and volume keys in Reno2 are located in an easy-to-press, finger position. It also has all the familiar ports and keys: 3.5 audio jack, Type C port, dual SIM tray, including a shared SIM slot with an external memory card slot. Reno2 only has a single speaker placed at the bottom edge, the speaker does not support creating stereo effects like some other products. However, the single speaker is quite loud, solid and clear, not distorted when increasing the volume.

The screen is full of open borders, comfortable enough to use outdoors

Reno2 has a 6.5 inch AMOLED screen, no rabbit ears or water droplets, so the content is displayed completely. Compared to the previous generation, the screen of Reno2 is larger than 0.1 inch and a bit longer with a 20: 9 aspect ratio. The screen resolution is still Full-HD + with a pixel density of 401 PPI, detailed enough to display the type of content on the phone.

The screen of this phone has very high brightness, outdoor use is still good. The machine has two color display modes: the default is “vivid mode” that displays the vivid, vibrant colors typical of AMOLED panels and “gentle mode” reproduces colors similar to IPS LCD panels, Pale colors but closer to standard colors.

In addition, Oppo also introduced some eye protection features for users such as night mode to reduce blue light causing eye strain and feature to reduce flickering when viewed at low brightness at night.

The graphics game quite heavy as Dead Trigger 2 is stable with a frame rate of 60fps. When playing PUBG Mobile, the game defaults to HD graphics and smooth processing. Currently, Reno2 has not been able to play PUBG Mobile in HDR and Ultra HD graphics modes.

where can you get a OPPO RENO2 online

Reno2 has a 4000 mAh battery, slightly better than the 3765 mAh battery of the previous generation Reno. The increased battery capacity combined with the 4 camera cluster has made the body of this phone thicker than the previous generation. However, the increase in battery capacity has greatly improved practical efficiency. Movie, web surfing and gaming are all much better than Reno, making it the top-rated battery in the premium segment.

The main camera is still a Sony IMX586 sensor with the same 48MP resolution as the original Reno but added optical image stabilization. Besides, the 8MP ultra wide-angle camera is capable of autofocus, a feature that is rarely available on super-wide-angle cameras in other phones.

In terms of quality, bright photos from the 48MP main camera still bears similarities with the main camera on the Reno. Highly detailed, in-depth photo with balanced colors. The colors are sometimes a bit darker but the image is still natural, similar to what we see on the outside. In complex light scenes, the main camera also handles the difference between light and shadow quite well.

When shooting in low light, the difference between normal mode and night mode was not as much as on the previous Reno. This is probably due to the appearance of optical image stabilization (OIS), which helps the main camera confidently expose for longer without any shake. In the low-light context, Reno2 does not try to push the light of the photo, but maintains a moderate brightness, making the image more natural like the camera on recent iPhone models. Colors continue to reproduce well. Night mode is still in that direction, but makes the dark areas of the image clearer.

In background delete mode, Reno2 uses a 2MP black and white camera to capture depth to support the main camera for portrait photography. Photos sometimes still get mistaken, erased a little edge of the subject, but overall, the machine still gives beautiful portraits, natural and background delete in moderation, not too harsh. Oppo also uses black and white 2MP cameras and software algorithms to create beautiful filters and effects for portrait photos.

Reno2’s 8MP ultra-wide angle is an interesting component that can capture both landscape or architectural photos, while also adding the functionality of a macro camera close-up. Photos taken from wide-angle cameras have fairly wide light bands and good image processing. However, compared to the main camera, the image is less detailed and noticeable with noise, especially when shooting in complex or underexposed light conditions. The device is also automatically distorted, not allowed to turn on and off like Samsung smartphones, so the wide-angle is narrowed. The interesting thing about this camera is that it is possible to shoot close-up at very close distances, up to 2.5cm and photos taken at such close distances look quite nice and fine details.

Although there is only a single camera, the front camera of Reno2 can take selfies to remove fonts. When removing the font, the beauty effect is automatically activated to help the face smooth, clear white pink. Part of the background is also moderately deleted, so it looks quite natural. The edge of the subject is removed quite smoothly, although it is still sometimes soft.

Software diverse features but not yet dark mode

Besides, Color OS 6.1 continues to retain Oppo familiar features such as locking the application, creating a private space for content that needs to be secured, cloning the application to use two accounts in parallel. The game to experience is not bothered by notifications, driving mode or a variety of gesture key replacement gesture options.

Overall, the software on Oppo devices has a pretty cool interface and lots of features. However, the software aspect is also limited: Oppo has crammed many pre-installed applications that many people dislike, and currently, Color OS has not had a relatively dark mode. Software from other vendors such as Samsung, Apple and Google.