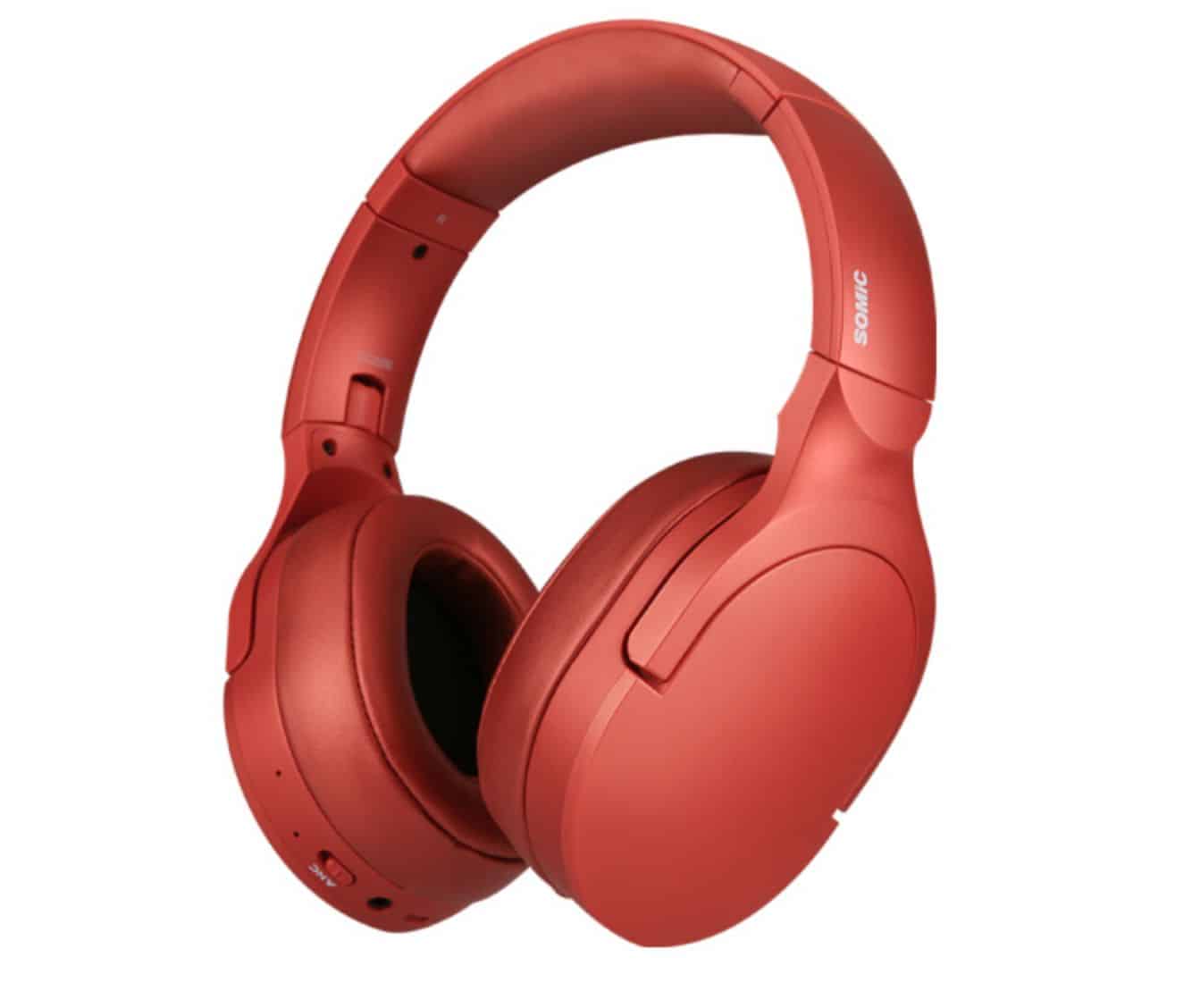 Inside instead of having a zipper-type hard box, we have a very large soft canvas bag. Depending on the person, this is an ‘upgrade’ or ‘degradation’. For me, this is an upgrade, because cloth bags will be less occupie area than when I put them in my bag.

In the box, in addition to headphones we still have enough micro USB charging cord, 3.5mm music line and plug port on the plane. So in addition to the bag change, the BT version retains the same accessories as the higher-end ANC version.

The company like to use the same mold for both ANC and BT versions, when these 2 pairs of headphones have the same design every millimeter! We still have a pair of hooded headphones with a minimalistic design, only one color, not any colorful motifs. But with the BT version, we have two more color options, gray and red, in addition to two colors like the ANC version is black and blue.

We still have the frame made of steel, so the quality is very good, it is much tougher to hold than the products made of 100% plastic.

Ear cushions and head cushions are also preserved, with good thickness so wearing on the ear feels good. The clamping of the SC2000ANC and the BT version are larger than normal, but also because of the good passive noise resistance, filter out a part of the noise outside without using electricity.

2 connection ports (micro USB and 3.5mm) with control buttons placed on the right ear. The difference between the two pairs of headphones is that in the ANC version, the lever is used to control the active noise stack, while in this pair of headphones it is used to turn the power on and off.

Overall, I have an integrated review of the external design of SC2000BT, which has a lower price than the SC2000ANC, but the pair has the same design and perfect quality, doesn’t give a cheap feel.

where can you get a Somic SC2000BT online

Despite being a lower-end version, the BT version is favored by the company for using the newer Qualcomm QCC3003 Bluetooth 5.0 chip compared to 4.1 on the ANC version. This means that the BT version is more energy efficient (partly because there is no active noise protection) – 38 hours compared to 24 hours.

As for latency, the SC2000ANC is almost never late, so the BT version cannot be upgraded any further despite the newer version of Bluetooth 5.0. I appreciate the almost zero delay of both versions, making watching videos and movies more ‘standard’ than those with True wireless headphones, often with lag.

Is the difference between ANC and BT versions only active proactive noise? The answer is no because these two pairs of headphones also have a slight difference in sound quality, although not too much. Both have slight V-shape soundstones, but the SC2000BT does not know if it is using a different type of speaker membrane, or has a new Bluetooth chip set, but the pair has a slightly thinner sound band.

The bass band is still emphasized, when the volume is very full and it doesn’t give the feeling of missing even with the Dance music. Double-bass in Don’t get arount much anymore is thick, sturdy and full of sub bass and mid bass. The sub-bass section seems to be a bit more streamlined than the SC2000ANC, which could also be a weakness because of faster interruptions in EDM tracks, but can also become a strong point when playing Jazz songs, giving bass bouncing. than. The mid-bass section does not seem to be as much affected, still has good impact, showing a healthy, vibrant drum without the boomy phenomenon.

The difference of the bass band is not really much, and users will definitely feel satisfied with both, but the bigger difference is in the middle range. The vocalist’s voice is slightly backward in the BT version, which is also a bit more streamlined. I personally like the Chantal Chamberland voice in Cry me a river as thick and warmer as the ANC version. SC2000BT’s performance is not bad at all, when it comes to balancing from the middle to the high-middle, but still avoiding unpleasant sibalances, but if the user needs to be bold in the voice, he should invest more to buy ANC version.

In both headphones, what I am most satisfied with is the high range. The high strip has a very thick volume, no shortage of weight like the pair of bass-head headphones. Treble also went up quite a bit, since it partly shows the temperament of Hihat in Take Five, which makes it more ‘Jazz’.

Cheaper than its SC2000ANC seniors by $50, whether SC2000BT is worth the money that users spend. We still have an exterior design in the direction of minimalist, sturdy finishing quality with steel frame, comfortable wearing style but has been reduced to active noise and sound quality has a little change. For me, $50 is not a small amount of money, so despite the slightly thinner noise and substance resistance, the SC2000BT is still a very valuable option, especially for those who only listen to music in the house or quiet places.

– Use the latest Bluetooth 5.0 standard

– Proceeding of active noise suppression (but with lower selling prices)

– Medium sound can be made thinner than SC2000ANC