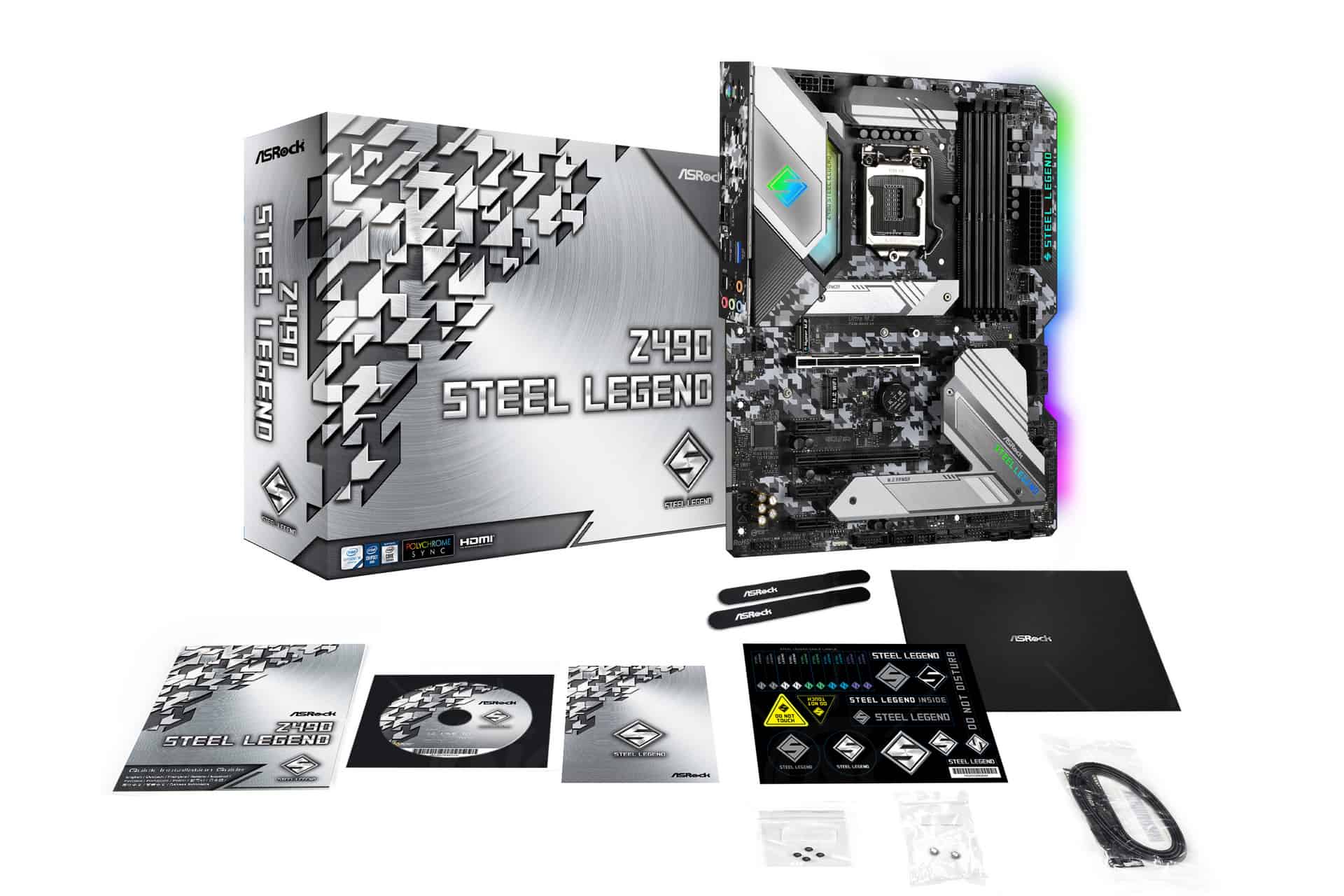 ASRock Z490 Steel Legend is not only a competitive, colorful mainboard with RGB lighting, but it is also a perfect combination for the 10th Generation Intel Core i7 / i5 processors in both non-K and K.

Z490 Steel Legend as well as the current versions of the Steel Legend series still use two main gray-white tones. With the PCB board made from high-quality fiberglass, the surface is covered with a military camo motif to make the product somewhat more prominent.

The centerpiece of the area around the CPU socket will still be the VRM heatsink assembly with two separate aluminum die-cast units. CPU power will be distributed through a cluster of 10 phases of real power to the core and 2 power phases for the remaining IO.

VRM cluster with key components is 12-phase Intersil ISL69269 controller and PowerStage SiC632A 50A, Dr.Mos 60A choke and high quality 12K black capacitors, providing a fairly abundant voltage source for the processor i5 / i7 processor.

A cover panel with RGB LEDs covers all the rear I / O ports. In the normal state, the inner cover will not stand out, but under RGB lighting, the icon of the Steel Legend series will be the focal point of this area.

However, the position of the CPU Fan control pin is arranged too close to the MosFET aluminum blade, which makes it difficult to plug the CPU fan or will be disoriented as the image below. This is what ASRock needs to improve in later versions.

Four memory slots support up to 4266+ overclocking and maximum capacity up to 128GB (depending on CPU series). Notice that the edge of this mainboard overhangs the space for the Steel Legend brand nameplate, which is also illuminated by the built-in RGB lights below the PCB.

The chipset is supported by a large aluminum plate, which also serves as a heat sink for the second M.2 PCIe.

The audio cluster on the Z490 Steel Legend is still the Realtek ALC1200 chip that supports Nihimic Audio technology and Nichicon audio capacitors.

With Z490 Steel Legend, it will be equipped with a slot that ASRock called Hyper M.2, the slot is available for next-generation processors that support the PCIe 4.0 interface.

The back IO is still full of dissipated communication as well as two holes for capturing backup wifi antennas.

Overall, the Z490 Steel Legend’s BIOS interface is similar to that of other UEFI-based products from ASRock. Still with two Easy Mode for normal users with simple settings tweaks and Advanced Mode section with advanced options, especially overclocking the system.

With the Z490 Steel Legend’s BIOS, due to Intel’s requirements and limitations, the BIOS will set default CPU power limits by Intel recommendations by default. No matter how high the processor overclocking, executing full-load the processor will only work at the default PL2 limit. Therefore, for the processor to work properly with the desired clock speed such as 5GHz, you will have to make fine adjustments to the two indicators PL1 and PL2 through the setting of Short-Duration and Long-Duration on the BIOS of ASRock.

The second thing to note is that the clock when performing tasks related to the AVX instruction set on the Z490 Steel Legend will not be equal to the core clock. At AVX, you must set the value to 1 (ie reduce the multiplier by 1 step compared to the Ratio CPU) to ensure the system always operates stably. For example, with the Intel Core i5-10600KF processor we tested, setting the Ratio 5GHz CPU, the AVX related calculations would only work at 4.9GHz.

The BIOS of ASRock also has a useful feature that is the FAN-Tastic Tuning feature, which allows you to fine-tune the operation of each fan on the motherboard as you like.

where can you get a ASROCK Z490 STEEL LEGEND online

ASRock also provides users with a system tweaking software in the Windows operating system, A-Tuning. You can still perform fast CPU overclocking inside A-Tuning, as well as fine-tune the operation of the fan connectors.

The second software you need to know about is ASRRGBLED, which is used to customize the mainboard’s built-in RGB lighting and sync lighting through the 5GB volt and RGB 12V volt pins.

With the Intel Core i5-10600KF processor, through the BIOS with a few customizations, we easily achieved a 5GHz clock speed on this mainboard. With 10-phase VRM clusters, you won’t have to worry about whether the CPU is getting enough power when pairing this motherboard with 10-generation Intel Core i5 / i7 processors.

The eye-catching design integrates multi-position RGB, also features state-of-the-art features such as powerful overclocking support, VRM cluster with 10-phase CPU, and heat sink for both M.2 slots, high-speed Type-C connection, 2.5Gbps LAN as well as M.2 2230 slot for extending Intel Wi-Fi wireless network connection. ASRock Z490 Steel Legend is a perfect combination for the 10th generation Intel Core i5 / i7 processors. It’s nothing we have to complain about the performance of this motherboard. It is definitely an option that you should not ignore when you intend to equip a mid-range gaming PC system at a reasonable cost, high performance.